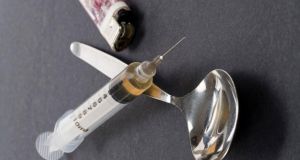 “Selling drugs is not a choice at the expense of several other options and the commonplace mantra of ‘just get a job’ is both ill-conceived and self-defeating.” Photograph: Thinkstock

While illegal drugs are prevalent in all areas of society, they are endemic in some. The most telling aspect that unites the young men involved in the supply chain is not something they possess, but rather something they lack: hope.

The concept that the average drug dealer lives a life of glamour and excess has long been debunked by studies such as Sudhir Venkatesh’s Gang Leader for a Day (2009) and Niamh Hourigan’s Understanding Limerick (2011). The reality for the average foot soldier is hustling to make ends meet while trying to stay out of prison. Young men, alienated and susceptible, agree to sell drugs to earn what they see as a decent wage when few other opportunities are open to them.

Like many of us, his dream may well have been to play for Manchester United growing up

The young drug dealer is a lightning rod for public scorn. Many citizens fear the aggression and unpredictability of his behaviour. The citizen has every right to feel this. The disaffected youth is angry and he is unpredictable. He is this way not because he suffers from some innate malice or vindictive character, though: he is angry because he is scared and vulnerable. His ability to express emotion, other than through aggression, is limited. His days are long and uneventful. His home may not be a safe place and so he spends hours on end sitting on walls or wandering aimlessly.

The young man recognises the reality of his situation. Like many of us, his dream may well have been to play for Manchester United growing up. Over time, his dreams were never replaced by anything else. When other young people at 17 and 18 have worked out where they are going to college, these young men have worked out they are going nowhere. The delinquent youth is barely literate. He knows that the six or seven streets of his immediate community are the extent of his world: that or possibly prison.

Telling someone without qualifications, network or significant self-confidence to 'just get a job' is asking him to be exceptional

Outside this area, most people treat him with disdain and loathing. Nobody particularly wants to see him. Not shopkeepers, not employers, not other citizens. His is a world of bravado and reputation where any sign of weakness is punished. It’s all a big front. These young men are terrified. The same way we were all terrified at that time of our lives. The only difference being that all their fears are justified. They are almost certainly going to be unemployed, unmarried and living at home for years to come.

Selling drugs is not a choice at the expense of several other options and the commonplace mantra of “just get a job” is both ill-conceived and self-defeating. In many cases, the young people from marginalised areas who prosper do so as a result of tremendous support in the home, good fortune or being exceptional individuals. This latter point is central. Telling someone without qualifications, network or significant self-confidence to “just get a job” is asking him to be exceptional.

The only jobs open to an uneducated male are the most basic entry-level ones: one that would be slow to fire the imagination of any young person. What’s more, he may not even get one of these in the face of any competition. In contrast to these brutal realities, the rewards of money and gang membership are significant. Instead of feeling sorry for the man, local people in the community are now afraid of him. This is far better than pity. It is crucial to understand that reputation is the last vestige of self-actualisation and sense of self-worth for so many young males.

With all that in mind, it is a tribute to strong families, community workers and individual resolve that more young men don’t end up selling drugs. The biggest mistake we can make is failing to understand that dealing drugs is actually a logical choice for so many vulnerable individuals. If there is no tangible prospect of ever owning a business or a home or even a desirable car, the risks involved in crime become distorted. For some people, living that life of outward prosperity, even for a short period under the spectre of prison, is better than never having lived it at all.

If people do not have hope, they have nothing to los

Between 2007 and 2016, Limerick Regeneration invested more than €300 million in four of the city’s most marginalised areas. Less than 15 per cent of that money went into social and economic programmes. The rest went into buildings. Sadly, the figures aren’t that much different from what happened in Ballymun. Taking families suffering social problems out of one house and putting them in a new house with no extra supports does not solve the problem. There are few, if any, people working at the grassroots level who would advocate this approach.

If people do not have hope, they have nothing to lose. The majority of young people involved in crime are not making a large amount of money. Nor do I believe they have malice in their hearts. They are doing it because they have no hope. They are hopeless.

William Priestley has worked for more than 15 years with at-risk young people in Dublin, Limerick and the United States. His work on urban renewal and marginalisation, Inferno, Kid will premiere at the Limerick Fringe, April 4th-6th

1 Son putting elderly dad under pressure to sign over land
2 Covid-19: Museums, cinemas set to reopen next week as Varadkar warns of New Year restrictions
3 Irish tax policy is now a human rights issue for the UN
4 Alison Curtis: My guilt at not going for a second pregnancy
5 Stir-crazy Dutch holidaymakers set to descend on Caribbean island
Real news has value SUBSCRIBE