London and Dublin’s mental geographies have embarked on different trajectories

British prime minister Theresa May says a second Brexit referendum would "divide the country" and it could not be held before March 29th. Video: BBC's Andrew Marr Show 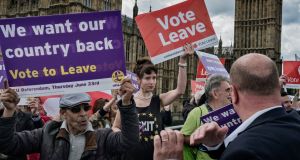 The main arguments and fears of the Brexiteers are essentially alien to the Irish.

Although Ireland will be deeply affected by Brexit, we have to an extraordinary extent been unaffected by the Brexit debate. The main arguments and fears of the Brexiteers are essentially alien to us. We don’t share their wish to return to an imagined past. Unlike the UK today, we are confident about our ability to promote our interests in the modern interdependent world. Xenophobia in Ireland is not on anything like the scale we have recently witnessed in the UK. Nor do we share the insularity of the Brexiteers. Quite remarkably, today it is the UK rather than Ireland which, in the words of the song, thanks God it’s surrounded by water.

In Ireland and Britain, we increasingly perceive reality in quite different ways. The reasons a majority in the UK voted to leave the EU are, paradoxically, the very same reasons that an overwhelming majority in Ireland want to stay. This is true of each of the six main arguments of the Brexiteers.

An attachment to sovereignty was the first and major reason put forward for Brexit. We in Ireland, however, understand sovereignty in the 21st century as something to be judiciously shared rather than as a tribal token to be protected from the sunlight like Gollum’s ring in The Hobbit. Gollum’s plaintive words, as he looks for the ring, could almost be those of Jacob Rees-Mogg speaking about British sovereignty: “We wants it. We needs it. Must have the precious. They stole it from us. Sneaky little hobbitses.”

Ireland’s desire to be as global as possible, on the contrary, is one of the very reasons we remain committed to the EU

Second, many Brexiteers want to leave the EU because they believe that it will enable Britain to “go global”. Ireland’s desire to be as global as possible, on the contrary, is one of the very reasons we remain committed to the EU. We understand that there is no contradiction between, on the one hand, developing the closest relations with our natural neighbourhood and market and, on the other hand, developing deeper links with the wider word. Indeed we recognise that the EU has the essential negotiating heft to make global reach effective, as reflected most recently in the EU’s major trade deal with Japan.

Third, the Brexit slogan about “taking control” was at the heart of the Leave campaign and has echoed across the British public debate ever since. The immense success of that policy has been on daily display at Westminster. Funnily enough, we in Ireland, in common with our other EU partners, are opting to stay in the EU precisely because we want to have control over the issues that affect us. Many issues, from education to health to policing, will, of course, continue to be controlled largely at national level since the EU can only exercise the powers which all member states have agreed to confer on it. But in Ireland we understand that if we want to maximise control over the important issues which by definition do not stop at borders – from trade to energy to international crime – these must be addressed on a cross-border basis; and we know the EU remains the most effective cross-border mechanism in the world.

Fourth, many Brexiteers are driven by the idea that they are putting their country first. But so, of course, do we. The real issue is whether national interests are to be defined narrowly and pursued as if the aim is to be masters of our own little world; or whether, as we believe in Ireland, those interests should be defined broadly and pursued in the knowledge that the real world is necessarily one of interdependence, compromise and shared interests.

Fifth, the most emotive argument for some, though not all, Brexiteers has been about keeping foreigners out. In Ireland, we support the principle of free movement of people and welcome the “new Irish” who are building up our economy, enriching our culture and making us proud to be Europeans.

Finally, many Brexit voters were influenced by the notion of the UK becoming more “independent”. Some even went so far as to call June 23rd, 2016, “Independence Day”. It requires myopia, when one thinks of say Finland or Lithuania, for any of our British friends to believe that they alone truly value independence. But it reaches full historical amnesia for any British person to believe they need, as Nigel Farage absurdly has done, to remind Ireland of the meaning of independence. Independence for us is not something to celebrate in lonely isolation; rather it allows us, to use Robert Emmet’s phrase, to take our place among the nations of the earth.

It has become clear that many Irish and British people now have quite different understandings of the world. The sad reality is that our mental geography is increasingly different and that we are now set on different trajectories. The mature Irish response to Brexit may prove to be the most important assertion yet of our psychological independence.

Bobby McDonagh is a former Irish ambassador to the EU, Britain and Italy