The Irish Times view on the US withdrawal from Syria: a dangerous, reckless move 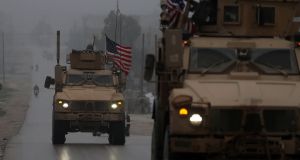 A line of US military vehicles in Syria’s northern city of Manbij last month. Donald Trump’s abrupt announcement on Twitter that the US would withdraw its 2,000 troops from Syria was a recklessly short-sighted move. Photograph: Delil Souleiman/AFP/Getty Images

With the Republican Party having lost control of the domestic agenda in Congress, it’s likely that President Donald Trump will pivot more to foreign affairs in the second half of his term. That is almost certain to create more instability in the world. Since the beginning of Trump’s presidency, America’s allies have taken reassurance from the presence of James Mattis as secretary of defence, but his departure last month has removed from the administration the last of the so-called “adults” who were thought to exert a moderating influence on Trump’s foreign policy.

A clear signal of the chaos to come was the decision that prompted Mattis to resign: Trump’s abrupt announcement on Twitter last month that the US would withdraw its 2,000 troops from Syria. It was a shockingly short-sighted move that amounts to the betrayal of key US allies, the Kurdish-led Syrian Democratic Forces, who have fought and died alongside US soldiers in their campaign against Islamic State (Isis) for years. Trump’s rationale – that Isis had been defeated – is a view no expert shares.

To pull them out so precipitously, while Isis is still in a position to regroup, is self-defeating and dangerous

While the jihadist outfit may have been driven from its strongholds and suffered large territorial losses across its so-called caliphate in Syria and Iraq, it has been morphing into an insurgent force and is clearly still capable of launching deadly attacks. It retains a pocket of land on the Syria-Iraq border and still has about 20,000-30,000 fighters, according to analysts. US troops cannot stay in the region forever, but to pull them out so precipitously, while Isis is still in a position to regroup, is self-defeating and dangerous.

The decision is a gift to Turkish president Recep Tayyip Erdogan, who will be freer, once the Americans leave, to crack down hard on the Kurds. It it also a victory for Russia and Iran, who will gladly step into the void the US troops leave behind and continue to expand their influence. And all this comes less than six months after national security adviser John Bolton declared that US troops would remain on the ground as long as Iran or its proxies remained there.

Since Trump’s announcement, his advisers have been attempting to contain the fallout. Whereas the president initially declared US troops would be out of Syria within 30 days, Bolton in recent days said they would remain on the ground until the last remnants of Isis were defeated and Turkey provided guarantees that it would not strike Kurdish forces. That could keep the Americans in Syria for months if not years.

Either way, Trump, in a single tweet, gave up what leverage the US still has in Syria without getting anything in return. It was a reckless and dangerous decision. For US allies, in the Middle East and elsewhere, the message is clear: for as long as Donald Trump is in the White House, you can no longer count on Washington.