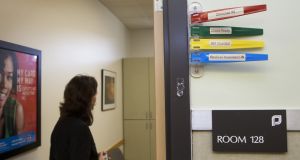 ‘Most women are cared for without the need for onward referral. When they are, there is a network of committed obstetricians and nurses in hospitals, caring for them.’ Photograph: Getty Images

I never thought I would be a provider of abortion services. It’s not that surprising really. Abortion was not mentioned once in the medical curriculum when I qualified 14 years ago. It was an unspoken phenomenon, a secret reality. Before I became a GP, I never had a real conversation about abortion. It’s astonishing to consider that fact now, knowing that 25 million unsafe abortions happen each year, mostly in developing countries. High-profile legal cases, such as the X Case, were not seen as healthcare issues by our profession.

The threat of criminalisation contributed to this silence– a chilling effect, with doctors worried if they provided information or if they acted outside of the constitutional restraints, imposed by the Eighth Amendment. Though there are notable exceptions, including the Irish Family Planning Association, it is a sad epitaph that it took so long for the medical profession to find its voice.

Part of the cruelty of the recent referendum campaign was how women and couples had to give up their anonymity and explain in detail the traumas imposed by our hypocrisy. Their long fight for rights, in the courts of Europe and in our media, supported by advocacy groups and lawyers, was successful.

Now, I’m one of approximately 300 GPs who has been providing abortion services to women over the past seven weeks. The Abortion Rights Campaign advocated a service that is free to all women, safe and legal. Only seven months after 1,429,981 people voted to remove the Eighth Amendment, this care is imbedded in communities all over Ireland, integrated within existing GP practices, without stigma.

When the door closes in the consultation room, we no longer say: “I am sorry, I can’t help you.” Our waiting rooms do not discriminate or divulge secrets. Most women are cared for without the need for onward referral. When they are, there is a network of committed obstetricians and nurses in hospitals, caring for them.

Like so many of the doctors and nurses involved, I am incredibly proud to be part of this new movement. It is a privilege (and challenge) being a GP, but I have never been as professionally rewarded, as in the past seven weeks.

One could be led to believe, reading commentaries over the past month (which did not speak to providers) that the provision of care has been poor. Far from it. We have set a world record for the implementation of a comprehensive abortion service. Indeed we are the envy of many healthcare systems.

Concurrent to the beginning of services in Ireland, the World Health Organisation launched their guideline on the medical management of abortion, in January. It recommended community-based provision of mifepristone and misoprostol; that is exactly what GPs are now providing. This is now part of the fabric of normal healthcare in Ireland. The commitment of doctors and nurses to get this service started has been crucial, led by educational groups such as Start. GPs and obstetricians have attended training and guideline writing sessions at weekends, evenings and yet more weekends; learning new information and clarifying older values.

The implementation of abortion services in Ireland also provides broader lessons for the entire health service and for wider civic progress in Ireland. First, we can see what can happen when implementation has political commitment and leadership.

We have seen some nefarious tactics, such as those recently seen outside our maternity hospitals

Second, politicians listened to and trusted front-line staff who were going to provide the service, especially in the last six months. It is no secret that GPs were put out by some of the proclamations, in the absence of dialogue, before the referendum. The relationship has not always been easy, but we focused on a common purpose.

Third, credit rarely lands with the unseen policymakers, managers and administrators in our public healthcare system. A small number of committed, dedicated and excellent professionals worked tirelessly to make this service happen.

The culture described above, unlike one doctors normally encounter, has empowered and enabled a system to achieve something remarkable.

I have also reflected on the conservative clarion calls, which as predicted, have not come to pass.

Anti-abortion doctors are in no way affected by the new service and their conscientious right to object to care is maintained and respected. Our professional representative bodies have also faced difficulties, under pressure from anti-choice lobby groups.

We have also seen some nefarious tactics, such as those recently seen outside our maternity hospitals. Fortunately, the Irish public appear to have no appetite for tolerating intimidation of our citizens.

All is not perfect. As doctors we are still learning, as we always are. We will need to evaluate our services to improve the care we provide. Exclusion zones are urgently needed outside any location that provides abortion services – it is wholly inappropriate to endorse the intimidation of women as they enter a building to access healthcare.

Universal access to contraception must be provided as part of an overarching strategy to improve sexual health and education. The three-day wait period, as predicted, has been particularly troublesome for some women, a needless insertion in to the legislation.

A few areas in Ireland do not have a GP-provider, but this should be resolved soon as more and more providers are trained. Women in Northern Ireland need a mechanism to access care. And many other women have been left behind, including those who are pregnant beyond 12 weeks. Many of these restrictions can and must be revised before the “three-year” review.

Despite some real challenges, we have come a long way and there are many positives. On May 25th last, the medical profession did not just find its voice, it stood up and said “we will provide”. Supported by policymakers and administrators, a publicly funded universal service is now happening; built on trust, listening and the realisation of primary care.

Dr Mark Murphy is a GP in Dublin. He is a member of Doctors for Choice and the Start Group who support the implementation of abortion services in Ireland

1 Harry and Meghan will no longer be working members of British royal family
2 Netflix: The best 101 films to watch right now
3 Chris Hadfield on the climate crisis: ‘The world has seen much, much worse’
4 Mary Lou has to call for the smelling salts as SF councillor deals a knock-out blow
5 The cost of a Dublin cottage refurb: ‘We struggled with the mortgage lending rules’
Real news has value SUBSCRIBE