The Irish Times view on Israel-Palestine: a worthwhile Irish initiative 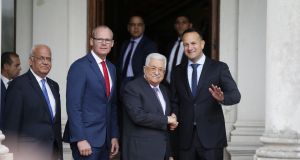 The convening of a meeting of Arab and EU foreign ministers in Dublin yesterday to discuss the Middle East peace process appears to be a serious effort by the Government to explore the potential for joint initiatives and to show solidarity with the Palestinians at a sensitive moment. The meeting at Farmleigh in Dublin, described as a private “consultative” gathering by Irish diplomats, was due to be attended by representatives of France, Egypt, Jordan, Sweden, Bulgaria and Cyprus, as well as the Palestinian Authority and the Arab League.* The agenda was not made public, but Minister for Foreign Affairs Simon Coveney described it as an opportunity to support the Palestinian Authority’s international engagement and to look at “ideas and approaches... that can be helpful to all sides.”

Nobody is under any illusions as to what Ireland – or even the EU – can achieve alone. Any attempt to bring Israelis and Palestinians back to the table requires not only the political will of both parties but fair, serious-minded sponsorship by the United States. So far the Trump administration has shown no inclination to play that role. On the contrary, by its actions, chiefly its unilateral recognition of Jerusalem as Israel’s capital and sharp cuts to aid for Palestinians, Washington has willingly dispensed with any pretence that it might act as an honest broker.

The long-anticipated peace plan drafted by Trump’s son-in-law, Jared Jushner, is now expected after the Israeli elections in April, but few of the key players hold out any hope that it will offer a workable roadmap. Palestinians have pre-emptively rejected it, and the wider Arab response has been sceptical at best. On the other side, even if Israel made any concessions, these would likely be met by opposition within a governing coalition comprised of religious and nationalist hardliners.

The chances of reviving the moribund peace process are remote, with little prospect of movement while Trump remains in office. Even if the EU were capable of concerted action – its internal divisions on the issue would make that difficult to achieve – Europe alone cannot bring the parties together. That will increase pressure in many EU states for some coordinated action in solidarity with Palestinians – recognition of the state of Palestine, for example, or a ban on importing goods from illegal settlements, neither of which the Government has indicated it is willing to move on without EU support.

No doubt these and other ideas will have got an airing at Farmleigh. In the meantime, the Government, and the EU in general, must do as much as they can to fill the leadership gap vacated by the United States – not least by continuing loudly to oppose the growth of illegal settlements, ensuring funding for vital services in the occupied territories and keeping the two-state solution high on the international agenda.