Newton Emerson: Most Dublin politicians have no understanding of Northern Ireland 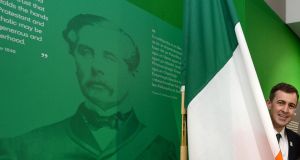 Fianna Fáil Senator Mark Daly commissioned a poll in which 500 people in the Republic were told Northern Ireland requires no subsidy and then asked if they would like to see a united Ireland, to which 73 per cent said yes.

Sympathy is due to Northern nationalists after the latest report from Fianna Fáil Senator Mark Daly. Last July, while still a member of the joint Oireachtas committee on the Belfast Agreement, Daly produced what he grandly titled “research” claiming Northern Ireland’s £10 billion annual subsidy is an accounting mistake and the actual figure is zero. This claim was so preposterous even Sinn Féin was reluctant to cite it.

Last November, Daly commissioned a poll in which 500 people in the Republic were told Northern Ireland requires no subsidy then asked if they would like to see a united Ireland, to which 73 per cent said yes.

Now the Senator has produced another report, again grandly titled “research”, claiming a hard Border and a “rushed border poll” are both equally certain to provoke violence and the only way to avoid this is to develop a shared Northern Ireland identity and society through, first and foremost, integrated education.

Taken together, Daly’s efforts constitute a near parody of Northern nationalism’s cynicism about Southern commitment to unification: namely, that a united Ireland is a great idea as long as it costs nothing and Northerners sort out all their differences before anyone even thinks of holding a vote on it.

Senator Daly is not alone in making this painfully apparent. Statements on Brexit and a border poll from the Taoiseach, the Tánaiste and the leadership of Fianna Fáil have all conveyed exactly the same message in only slightly less gauche terms. It is a Free State prayer of St Augustine: Lord make me whole, but not yet.

British politicians have been widely derided since the EU referendum for not understanding Northern Ireland. Most Dublin politicians are no better. They may be aware of the sea-change in nationalist attitudes over the past two years but they have barely grasped the thinking behind it.

The peace process presented nationalists with a political quandary. If Northern Ireland ceased to be a “failed entity”, that might make a united Ireland less pressing. Conversely, if nationalists declined to throw themselves wholeheartedly into making Northern Ireland work, its failure could be seen as their fault and call their commitment to peace into question.

In the years after the 2007 St Andrew’s Agreement this trap appeared to have been sprung. The nationalist share of the vote declined steadily as DUP-Sinn Féin government bedded in.

People spoke more openly of a Northern Ireland identity, undeterred by nationalist complaints that it was a unionist contrivance or a British plot. In retrospect, the low point occurred in 2013, when US president Barack Obama gave a speech in Belfast calling for integrated education and comparing the religious division of children to the racially segregated schools of pre-civil rights America.

It was clear from his speech that, like Daly, Obama favoured a united Ireland and saw the building of a united Northern Ireland as its essential prerequisite. However, nationalists were so aghast the US consulate in Belfast was forced to issue a clarification that the president was not opposed to Catholic schools.

For many Catholics, those schools are the foundation of their distinct cultural Irishness. To deny them that within Northern Ireland would be enforced assimilation.

In my opinion, which I can apparently call research, nationalists are still mistaken

Obama made the same point as late as April 2016, in a speech in London, when he also referred to “forging a new identity that is about being from Northern Ireland.”

The Brexit vote two months later, and the RHI scandal that quickly followed, changed everything. Nationalists now see themselves as freed from the trap – they are under no obligation to make Northern Ireland work if unionists and the British government have broken it.

This has moved us beyond the assumption, still evident in Dublin, that everything can go back to normal if a hard Border is avoided. The extent of nationalist relief at their political absolution should not be underestimated.

In my opinion, which I can apparently call research, nationalists are still mistaken. A functioning Northern Ireland, including devolution, remains essential for a peaceful future either within the UK or for the transition to a united Ireland.

However, this case can no longer be made with the traditional platitudes emanating from the Republic. Fresh thinking is required, along with new intervention from the British and Irish governments. Nationalists will settle for nothing less.

Among the most challenging matters to consider is whether we are approaching the point where a border poll might assist stability, or at least do more good than harm.

Nationalism is going for broke with a headcount vision of unity, and has convinced itself amid the Brexit hysteria that it can win. It cannot – its vote in both elections since the EU referendum was 42 per cent. Unionism last polled 49 per cent.

Establishing that baseline could be necessary, not to defeat nationalism but to demonstrate to unionists and nationalists how finely balanced both communities are, and why Northern Ireland must be shared to secure anyone’s constitutional aspiration.