Why we should stop worrying and learn to love Brexit

Economists in Dublin look at possible upsides to the Brexit debacle. 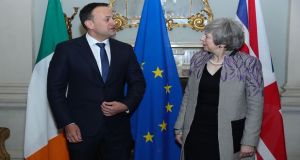 Taoiseach Leo Varadkar and British PM Theresa May will have their work cut out to ensure a hard borders does indeed breed resentment and fear in the event of a no-deal Brexit. Photograph: AFP/Getty Images

Amid all the doom and gloom emanating from Dublin about Brexit there is an underlying feeling that, regardless of what type of British withdrawal occurs, it is the Irish who will suffer the most.

Most obviously the peace and reconciliation project in Northern Ireland stands under threat from a long-standing British ignorance of Irish affairs. Hard borders do indeed breed resentment and fear.

Brexit also puts into context how generations of Irish politicians have waxed lyrical about Ireland’s global economy. Remember former taoiseach Enda Kenny’s “the best small country in the world to do business” mantra during the crisis years? However, the reality, in 2019 just as in 1919, is that Ireland remains a fully paid-up member of the British Isles economic unit and an important part of wider global trade flows based on the former British empire (most notably the US and Canada). It’s remarkable given Ireland’s miniature size, but Dublin-London is the second busiest air-route in the world.

Ireland’s fears are thus perfectly understandable given the traditional dependence upon Britain (as much about geography as economics) and the ability of the parliament in Westminster to constantly misjudge Irish affairs. Yet, for all the worries about hard borders, jobs and economic growth, Brexit actually offers Ireland a unique opportunity to emerge from behind Britain’s shadow and develop a truly globalist economic strategy right at the heart of the EU. There has never been a better time for Ireland to set out an openly Atlanticist, socially liberal, pro-market vision that can act as a counterpoint to the populist political forces that are gathering across the EU and beyond.

So why should Ireland embrace Brexit? Here’s why:

First, even the most ardent Anglophiles in the EU have been shaken by the nature, tone and implementation of Britain’s negotiating stance since the referendum of 2016. From the self-imposed “red lines” of the prime minister, Theresa May, to the lack of understanding regarding the complexity of EU decision-making, the Brexit process has ruthlessly exposed the conceit and bloated self-importance at the heart of the Tory political class. While this has always been obvious to the majority of the Irish population (even in the post-Good Friday agreement, queen visiting, rugby in Croke Park landscape) for Brussels-based decision-makers this has been an eye-opening experience. Nobody now asks why Ireland needs a backstop. It’s obvious to all. Dealing with the Brits is like being in a coalition government: it never ends well for the junior partner.

Second, with the British no longer part of the EU, Ireland can (for the first time since joining in 1973) set out a clear vision for the future of Europe. Up to now, Ireland’s position on the further development of the EU has largely been defensive and negative. It usually involved hiding behind British positions on difficult issues. “No” to tax harmonisation; “no” to a digital tax and a shocking disengagement with combatting climate change. Yet, a renewed focus on the key drivers of Irish wealth – global trade and the European single market – could provide Ireland with a clear path towards a more positive and constructive engagement with their continental partners. And here, it will be possible for Ireland to act as a facilitator in bringing together other like-minded members such as the Netherlands, the Scandinavians and the Baltics (as is already occurring informally through the so-called “New Hanseatic League”). This mechanism can – if backed by diplomatic and political resources – act as a valuable counterpoint to the much-vaunted Franco-German core of European integration.

Thirdly, Irish public policy since independence in 1921 has been defined by the unwavering commitment to lessen economic dependence upon Britain. A fact that has been casually forgotten over the past decade of Anglo-Irish detente. Notwithstanding the often-ignorant rhetoric of Irish republicanism, it was not until the 1990s that the economic landscape emerged that allowed Ireland diversify its trading base. Brexit will further allow Ireland – as a committed and active member of the EU – to emerge as a key global location for inward investment irrespective of corporate tax levels (a point continually misunderstood in Brussels). Exports to Britain will always remain important for elements of the Irish economy (most notably agriculture and associated food and drink industries) but Brexit offers a real opportunity to transform Ireland into a global business hub within the EU. Ironically, it also facilitates the long held dream of modern Ireland’s founders to limit economic exposure to Britain.

Finally, events since 2016 have given rise to much talk of a new momentum towards a United Ireland. This narrative is deeply flawed. Brexit – regardless of whether a soft or hard border comes into existence in Ireland – will actually further increase the fundamental political, economic, social and cultural differences that have long existed between southern and Northern Ireland. Long before partition in 1921, the unionist-dominated areas of Ireland had embarked on a more industrial, more religiously evangelical and deeply anti-Catholic development path. These fundamentals have not changed in the ruling Democratic Unionist Party (DUP) and have extended to embrace a deeply anti-European element in recent decades. Realistically the economic cost alone (a £10 billion annual subvention from London keeps the lights on in Northern Ireland) would be disastrous for the Government in Dublin, not to mention the political nightmare and subsequent culture wars. For Ireland, Brexit should be welcomed as formalising partition, not ending it.

Brexit is many things to many people. For some, a real setback to the process of European integration. For others, a clear example of British political dysfunction. However, for Ireland, Brexit is a unique opportunity on many different levels. That’s why rather than fear Britain leaving, Ireland should welcome it. A hundred years after the Irish War of Independence started, is it not time Ireland stood on its own two feet?