Mladic is convicted but jury is still out on Yugoslav tribunal 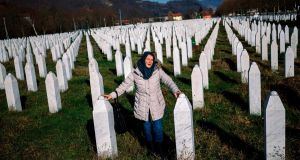 A woman mourns over a relative’s grave at the memorial centre of Potocari near Srebrenica on Thursday. Photograph: Dimitar Dilkoff/AFP/Getty Images

Gen Ratko Mladic, the former Bosnian Serb commander, has been found guilty of war crimes and other serious violations of international law. This was the last trial judgment to be delivered by the International Criminal Tribunal for the former Yugoslavia before its closure at the end of this year. It is one of the most important trials conducted by the war crimes court to date. It also marks the end of an era for one of the most significant developments in international criminal justice since the Nuremberg and Tokyo tribunals established in the aftermath of the second World War. However, apart from punishing some notorious individuals, what did the creation of the war crimes court achieve?

The backdrop to the creation of the court in 1993 was the mass killings, widespread and systematic sexual violence and ethnic cleansing that took place in the former Yugoslavia on a scale and ferocity not seen in Europe since the end of the second World War. When the UN Security Council established the war crimes court, the aim was to put an end to what are sometimes referred to as atrocity crimes and to contribute to the restoration of peace. The jury is still out on how far it succeeded in its objectives.

At times the pace of international criminal justice seemed too slow and too expensive. Inevitably, international investigations and trials take time. However, periods of pretrial detention have been inordinately long, especially in respect of its sister tribunal for Rwanda. Although slow to get up and running after being established, its indictments, decisions and judgments have since generated significant comment and controversy. Not all of this reflected well on those responsible for the administration of justice.

An overarching aim of the court was to pursue the most senior individual responsible for the atrocities that took place during the armed conflict in the former Yugoslavia. By doing so it was intended not just as a deterrent but also as a means to render justice to thousands of victims and their families, thus contributing to a lasting peace in the former Yugoslavia. Recognising the role of victims, though still dismissed by some lawyers as a waste of resources, is now an accepted practice.

Success in this regard is difficult to measure, especially against the background of crimes being perpetrated today in Syria, Yemen and elsewhere. It may even be argued that fear of being held criminally accountable is a factor in the reluctance of some leaders to step aside. However, impunity for atrocities has often inexorably fuelled the spiral of violence.

The numbers of cases heard by the court has been significant. The administration of justice cannot be selective in deciding who should be prosecuted and indictments addressed crimes committed against a range of ethnic groups from 1991 to 2001. Although those indicted include senior political and military figures from various parties to the Yugoslav conflicts, the court has faced criticism that it had an anti-Serb bias.

International criminal trials raise a number of other challenges, not least being the need to ensure a fair trial. An initial weakness, reflecting the speed with which the tribunal was established, were ambiguities in the statute of the court and difficulties applying procedures that tended to reflect common law principles. This led to criticism and contradictory comments by common law and civil law experts, especially when it came to respect for requirements of a fair trial and trial in absentia. The practice of the tribunal did not always clarify these issues and internal strife damaged its reputation.

The rights of the accused can also be compromised by the conflicting need to ensure the expeditious conduct of proceedings. Fairness in international criminal proceedings is not generally compatible with expedition.

Looming in the background throughout the Mladic trial was the memory of the Milosevic case. The former Serbian president had managed to exercise such a degree of control that it often looked like he was dictating the pace and agenda of his trial. He then died of a heart attack before the verdict could be handed down.

International courts will only ever pursue a few selected very senior individuals. The most effective deterrent remains a functioning domestic system to prosecute such offences. Many states now have revised their national legislation and they have specially designated police units to investigate war crimes. Nevertheless, the principal reason we need international courts is that states are often unwilling or unable to prosecute “their own”.

A significant weakness in the conduct of international trials remains the inequality in resources between the prosecution and defence teams, and the Mladic trial was no exception to this. A trial must be a forensic exercise to determine guilt or innocence and not be used for broader political purposes. In this regard the trial has been successful and the proceedings provide a record of one of the darkest chapters in Europe’s recent history. The success of this ad hoc UN court also provided the final impetus to create a permanent international criminal court to try individuals for serious war crimes and similar violations of international law.

It is worth recalling the words from the Nuremberg tribunal that crimes against international law are committed by individuals, not by abstract entities, and only by punishing those responsible can the provisions of international law be enforced. Ensuring accountability is important in itself and acts as a deterrent. It is also important because allowing impunity for atrocities can have serious consequences for international peace.

Dr Ray Murphy is a professor at the Irish Centre for Human Rights, National University of Ireland Galway