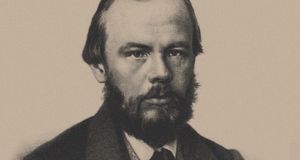 Dostoevsky had grown up in the shadow of an event known as the Decembrist revolt. Photograph: Getty Images

Although Christmas trees were a new phenomenon in the Russia of his childhood, the great novelist Fyodor Dostoevsky devoted not one but two of his short stories to the theme.

The first such Russian tree is credited to Tsarina Alexandra, who introduced it in 1817 (four years before the writer’s birth) out of nostalgia for her native Prussia. Thus the tradition was still filtering down from the aristocracy when Dostoevsky used it as a motif in his 1848 story, The Christmas Tree and the Wedding.

There, it serves as the backdrop to a cynical reflection on the influence of wealth on social status, as a bored guest at a high society wedding recalls a children’s New Year party from years before that led to the marriage.

When Dostoevsky returned to the theme nearly 30 years later with The Heavenly Christmas Tree (1876), however, it reflected the religious conversion he had undergone in intervening years.

The Russian poor are still just as poor then as in his earlier tale, perhaps even poorer. So the tree around which the child protagonists gather in the end is spiritual rather than physical, although, devout as he was, his last line expresses doubt about the happy ending.

Dostoevsky had grown up in the shadow of an event known as the Decembrist revolt, an attempted coup on December 26th (14th in the old Julian calendar) 1825, wherein reform-minded army officers tried to overthrow Csar Nicholas I.

They were subsequently exiled to Siberia, where many remained when Dostoevsky was imprisoned there a generation later for revolutionary tendencies. It was the wife of one of the Decembrists who sent him a copy of the Bible – the only book allowed in prison – that helped precipitate his conversion.

The pivotal event in Dostoevsky’s life also happened in December. On December 22nd, 1849, the young writer was one of several prisoners marched blindfolded into St Petersburg’s Semyonov Square, to be shot. As he later described the moment: “Then the sentence of death was read to all of us, we were told to kiss the cross, our swords were broken over our heads, and our last toilet was made. Then three were tied to the pillar for execution [. . .] I was in the second batch and no more than a minute was left to me to live.”

But instead of shots, the prisoners heard a messenger from the Csar arrive on horseback (as had been planned all along) with a last-minute reprieve.

They were headed for Siberia instead, and Dostoevsky at least was bound for literary greatness. Fictionalising the event afterwards, he imagined the doomed prisoner bargaining for his life with the promise of personal reform: “I would turn every minute into an age, nothing would be wasted, every minute accounted for . . .”

Christmas trees were banned in Russia after the Bolshevik revolution. They were later reintroduced by Stalin, perhaps because of the indirect influence of another writer, Mikhail Bulgakov.

Bulgakov was in general a victim of Soviet communism, but he had a big admirer in “Uncle Joe”, who protected him for a time. Stalin was especially fond of a play called The Days of the Turbins, in which Bulgakov dramatised the fate of a big-house family during the civil war.

For several years after its 1926 debut it was a great success. Then it was banned in 1929, apparently after a scene in which the singing of a nationalist anthem, normally done in a mocking way, was delivered with patriotic fervour by actors and audience alike.

The ban was reversed in 1932, something only Stalin could have ordered. Such was his love of the work he saw it 15 times, occasionally in disguise. Since the plot revolved around a New Year’s party, with a lavishly decorated Christmas tree, this is thought to be a factor in the officially approved re-emergence of the trees generally during the 1930s.

Maybe Stalin’s Messiah complex was a contributor too. He was after all a Decembrist by birth, an event that throughout his lifetime was dated to December 18th, 1879. Since then, scholars have established that he was born a year earlier than that, in 1878.

But the former date explains the lavish 50th birthday celebrations held for him 90 years ago this week, inaugurating the “cult of personality” that would surround Stalin for the rest of his life, and for several years afterwards, until it was formally denounced by his successor, Khrushchev.