How an Irish term for sewage may have entered American cuisine 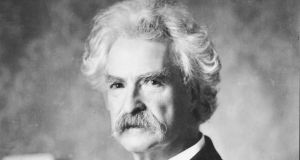 It seems to have been Mark Twain who first introduced ’slum gullion’ to print in what might be broadly called a catering context. Photograph: Hulton Archive/Getty Images

In a UK edition of one of his books, satirist PJ O’Rourke uses a word that felt somehow familiar and yet had me searching in dictionaries, ie: “It is with no little trepidation that I dish out this slumgullion of Americana”.

Not only did “slumgullion” sound Irish. It might plausibly have been the name of a townland in the countryside I grew up in. That’s because, from the hill behind our house, we could see some miles away a mountain called Slieve Gullion, the highest point in Co Armagh, much associated with Cuchulainn.

The area around it had acquired a different lore in my childhood. Indeed, O’Rourke visited it at least once during his spell as Rolling Stone magazine’s “investigative humourist”, in the 1980s. For a travel book on the world’s most dangerous places, Holidays in Hell, he subsequently wrote of Northern Ireland: “. . .the deeper you go into the Catholic counties, the more soporific the scenery becomes, until you arrive in South Armagh, close by the Irish Republic’s border, in the most narcoleptically bucolic spot on the face of the earth. This is ‘Bandit Country’.”

But slumgullion, which in the US means “stew” more or less, has nothing to do with Slieve Gullion, or Slieve Gallion (a peak in Derry made famous by the ballad Slieve Gallion Braes), or any other mountain.

On the contrary, those names have the opposite derivation, from an Irish word for “steep slope”. Whereas, when surmising the origins of slumgullion, US dictionaries generally consider the second half of it to be from the Irish word goilín, meaning “pit” or “pool”. The prefix is presumed to have the same origins as “slum” or “slime”, or both. And when the combination first appeared in US newspapers, in the 1800s, it was as a mining term, for the liquid waste left after washing gold in a sluice.

It seems to have been Mark Twain who first introduced it to print in what might be broadly called a catering context. His 1872 travelogue Roughing It includes this: “Then he poured for us a beverage which he called “Slum Gullion,” and it is hard to think he was not inspired when he named it. It really pretended to be tea, but there was too much dish-rag, and sand, and old bacon-rind in it to deceive the intelligent traveller.”

It was a drink then, obviously, rather than a stew.

Somewhere in the intervening decades it has thickened from beverage to food, although still of low quality. Hence another PJ O’Rourke book, The Bachelor Home Companion (1984), in which a list of emergency recipes for the challenged male housekeeper includes “Spice Slumgullion”, the instructions for making which go as follows:

“Seasoning is what gives food its flavour, so if you pour all those little jars of cloves and curry and ginger and garlic salt into boiling water, you should get something delicious.”

Facetious as that may have been, the word had worked its way into proper American kitchens by then. And if it generally refers to cheap, improvised dishes, it’s not always disparaging. On an online discussion forum in 2006, for example, where readers remembered favourite foods made by their “Moms”, one contributor eulogised a thing her grandmother called Slumgullion: “It’s basically mac and cheese on steroids – with macaroni, American cheese and milk, breakfast sausage, onions, and green peppers. Mmmmmmm . . . processed carby goodness.”

Anyway, getting back to the word’s roots, I couldn’t find Slumgullion in the OED or even in the late Terry Dolan’s Hiberno-English dictionary. But on the page of Dolan’s book where it might have appeared, I was interested to note in passing that the word “slob”, as applied to a person, was first used in print by Irish writers in the 1850s.

And in that same decade, as I’ve since discovered elsewhere, slob’s original meaning of “mud” was forming part of an earlier version of slumgullion, ie “slobgollion”, used by Melville in Moby Dick (1851) to describe the waste from processing whale carcasses.

But almost as an afterthought, I also looked up “Gullion” in Dolan’s dictionary. And sure enough, it’s listed, with two variant meanings: “muddy, swampy place” (Ulster Scots), or “drain of thick, rotten liquid from farmyard” (Monaghan).

So there we have it. In the space of 150 years, slumgullion may have flowed from the fetid farmyards of south Ulster, via the goldfields of California, into American cuisine. Mark my words, they’ll be serving it in Michelin-starred restaurants yet.