The only north Johnson cares about is north of England 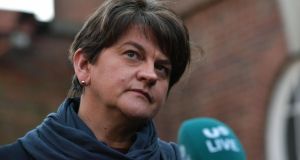 DUP leader Arlene Foster. “The DUP overplayed its hand. The extra £1.5 billion exchequer funding that they extracted from Theresa May . . . is a classic example of eaten bread instantly forgotten.” Photograph: Charles McQuillan/Getty Images

One intriguing question to emerge in the aftermath of the UK election is whether the SDLP will deepen its flirtation with Fianna Fáil. The SDLP’s successes in the South Belfast and Foyle constituencies were really remarkable.

In Foyle, party leader Colum Eastwood, who was being written off by many political commentators as incapable of halting the party’s decline, scored a truly massive win. He polled 26, 881 votes, leaving Sinn Féin’s sitting MP, Alisha McCallion, more than 17,000 votes behind him. The margin was spectacular and completely belied the conventional wisdom of political insiders that the outcome would be a close-run thing.

In South Belfast, Clare Hanna pulled off an amazing result as well. She got more than 27,000 votes, unseating the sitting DUP MP who polled only 11,600 votes. Admittedly Sinn Féin, which stood down its candidate, made Hanna’s margin wider. But even if he had run, the indications are that Hanna would still have won. Hanna had publicly distanced herself from any SDLP-Fianna Fáil alliance a few months ago.

To those of us who have attended SDLP fundraisers in Dublin for many years now, increasingly in hope rather than confidence, these results bring new hope and confidence that the centre-ground nationalists in the North have a bright future. In proportional representation elections the SDLP will do much better in future.

The proposed SDLP-Fianna Fáil link-up has always smacked a little of a political lifeline thrown in desperation. I have no doubt that the SDLP is in need of organisational political muscle and there would be political synergy in an alliance with a political organisation in the Republic.

The brands are different; the parties’ images are different. And so the endorsement of the partnership by a majority of SDLP rank and file in Newry last February came as a disappointment both to the party’s traditional southern ally, the Labour Party, and to Fine Gael Government Ministers. Perhaps Labour should be rebranding as the Social Democratic and Labour Party.

That the FF partnership’s leading proponent and opponent in the SDLP could each have spectacular success on the same day in the Westminster election suggests that Northern voters are not all that concerned about the link-up.

If Colum Eastwood had struggled in Foyle, Clare Hanna might have had some basis for seeking to reopen the matter. But now, one assumes there will be a truce in order to concentrate on beefing up the SDLP organisation.

If we see the restoration of power-sharing at Stormont, the SDLP will have to decide whether it would be better off opting to oppose a DUP-Sinn Féin coalition.

That coalition is a deeply unhappy political marriage. Both Sinn Féin and the DUP got a bloody nose last week at the hands of the SDLP and Alliance. Neither party has any emotional commitment to power-sharing. Each prefers the constitutional question as its battleground. But the electorate is tiring of posturing. For Sinn Féin, abstentionism from both Stormont and Westminster is unsustainable and damaging.

Both Sinn Féin and the DUP (with the possible exception of Nigel Dodds) will be anxious to avoid an Assembly election and will probably do a deal to restore power-sharing at Stormont, while attempting to blame each other for its breakdown

The DUP has served unionist voters poorly by its support for the hard-Brexit wing of the Tories. I have been writing for months that Boris Johnson would throw the DUP under the bus as soon as its Westminster numbers became irrelevant. Now that has come to pass.

Another great mystery is the massive delay in publication of the cash-for-ash report. Foster’s future hangs by a thread

For Johnson, concern about “the North” now means the north of England only. What happens beyond Hadrian’s Wall or across the Irish Sea is a lesser concern altogether. If the Tories do not deliver in spades for northern English constituencies, newly-elected MPs will mutiny. Poll after poll showed that Leave voters wanted Brexit “done” regardless of consequences for Northern Ireland’s unionists and that Brexit was more important than the union with Northern Ireland.

The DUP overplayed its hand. The extra £1.5 billion exchequer funding that they extracted from Theresa May to shore up public spending in the North is a classic example of eaten bread instantly forgotten.

They are blessed by the wretched state of the UUP. If there were a really credible unionist alternative to the DUP, a proportional representation election could be a disaster for Arlene Foster’s party.

Another great mystery is the massive delay in publication of the cash-for-ash report. Foster’s future hangs by a thread. Jeffrey Donaldson is hovering in the wings.

Anyone who has read Sam McBride’s page-turner Burned can easily guess where Sir Anthony Coughlan’s report will ultimately land. It won’t be pleasant for Foster, the DUP or, by the way, for Sinn Féin’s advisers in Stormont and their unelected puppet-masters in the Felons Club on the Falls Road.

A Border poll would have only one outcome in the next few years – rejection of a united Ireland and deepening of division in the North. That would suit Sinn Féin, stunting the emergence of the centre ground.

Those of us who believe in a truly united Ireland know that reconciliation and gradual demographic change are conditions for some form of confederal unity. In the meantime, beating ideological and constitutional drums is as pointless in the North as hardline Corbynism was in Britain.