Horse Sense – Frank McNally on the ups and downs of Epsom 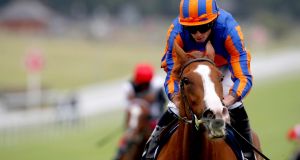 This year’s Epsom Oaks was a moral for our times. It was the triumph of Love, as expected, with a filly of that name justifying pre-race favouritism (11/10) to win for trainer Aidan O’Brien. But more instructive was the performance of one O’Brien’s other horses in the race, Passion.

Passion is the prevailing emotion of the corporate world these days, at least if you believe the marketeers. Everyone is passionate about everything now, especially if there’s a product involved that needs selling.

It’s no surprise there should be a racehorse with the name, even if Epsom punters appeared to mirror my distrust of the concept – the four-legged version could be backed at 25/1.

Anyone who took those long odds must have been excited early on when she tracked the leaders. She even hit the front for a time with four furlongs to go. Then, all too predictably, she faded. Love prevailed. Passion blew up early and finished nowhere.

There was also an interesting sub-plot in the Derby where, despite being a 66-1 no-hoper, a colt called Amhrán Na Bhfiann – yet another O’Brien horse – came third behind the surprise winner.

As usual in such cases, the entertainment this side of the Irish Sea was added to by the prospect of what an English race-caller would do to the name. And in fairness, he made a decent attempt.

The challenge of “Amhrán Na Bhfiann” for a non-speaker, if I may switch equestrian events for a moment, is a bit like approaching a triple combination at Hickstead.  The commentator cleared the second and third parts (the silent m and the softened b, respectively) without a problem. But as often happens, it was the easy bit that caught him out. In pronouncing Amhrán as “o-rawn”, he clipped the top pole off the first fence for an unlucky four faults.

Irish-language names are unusual in flat racing. They tend to be more common in the jumps form of the sport, where race callers at Cheltenham are frequently tested by the likes of “Cailín Áilainn” or “Caiseán Uí Cuain”. In a double joke at English commentators’ expense, there even used to be a horse called “O’Muircheartaigh”.

The O’Brien stables at Ballydoyle often pursue certain themes in the naming of their stars.

So could Amhrán Na Bhfiann be the start of a crash course in Irish for overseas commentators? Not for now, anyway. Of 112 named horses in training at the stables, this seems to be the only one in the first official language.

The Epsom Derby followed closely upon John Cleese’s online mugging for alleged cultural insensitivity, which also hinged on the challenges of Irish for the uninitiated.

In case you missed it, Cleese had been engaging in some free-association repartee with his Twitter followers, when somebody saw fit to explain the following to him: “Keeva is my dog’s name, but it’s spelt Caoimhe.” To which the great comedian responded, with humorous intent: “No wonder the Irish never had an empire.”

No, it wasn’t exactly the Dead Parrot Sketch. It barely qualified as a joke, in fact. A charitable audience or a dinner party would have let it drop quietly. But this was Twitter, where the insult to Irish, combined with the word “empire”, dropped more like a chandelier.

At any given time on Twitter, there are many users just waiting for a good chance to be offended. Once the word gets around that there has been an incident somewhere, they go rushing to the scene, sirens blaring on their ambulances of indignation. Cleese was lucky only in one respect. The aforementioned dog wasn’t set on him.

Speaking of empires, and getting back to Epsom, the Aidan O’Brien horse widely expected to win the Derby was Russian Emperor, the presumed best of his several runners.

But the story of the race was the apparent pacemaker Serpentine being allowed to open up such a big lead that, before the others realised, it was too late to catch him. And yet, despite the upset, the net result was the same as usual. Serpentine too came from Ballydoyle – a racing operation on which the sun never sets.

The anarchy loosed on the field behind him, meanwhile, included a horse that had started second favourite. It struggled early on, them improved a bit, but could only finish fifth. And so it was that the runners left trailing by Amhrán na Bhfiann, in a small but pleasant echo of history, included “English King”.