Dimly lit interior? Frank McNally on the notion that midlanders may be below sea-level, in more ways than one 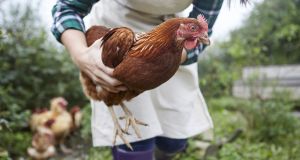 To cap it all, Stephen Rynne wrote, she had “an attractive way of stooping as she passes into the henhouses”. Photograph: Getty Images

One of the more contentious opinions of that otherwise affable writer Stephen Rynne – as I was reminded recently at the height of the ministerial geography debate – is that people from the Irish midlands are noticeably less intelligent than those from coastal areas.

I recalled he had expressed something to this effect in Green Fields, his classic memoir of farming life in 1930s Kildare, and that when first reading the book, it caused me to enter at least one exclamation mark in the margins. Hence the other night I went searching for the quotation and yes, there it was, in a passage about rearing chickens.

In Rynne’s defence – I presume he needs some defending from midlanders – it may be suspected that there were romantic influences on his judgment, inspired as it was by the visit of a poultry instructress with whom he was clearly charmed.

She was, he said, “tall, handsome, and shy, with eyes evergreen in colour like a December shrubbery”. There was also her “clear, glowing skin unspoiled by cosmetics” and her “brilliant smile”. To cap it all, she had “an attractive way of stooping as she passes into the henhouses”.

Those details placed on record, here’s what he wrote on the intelligence question: “She comes from Donegal: all the bright people on the loose in the midlands seem to come from the maritime counties; there are more brains in one square yard of any sea-bordered county than in a square mile of the central plains ...”

The ellipsis after “plains” is mine, because Rynne followed up immediately with an additional theory, in brackets, that might be misunderstood if not accompanied by a large dollop of context. His sentence continues, “... because there is less intermingling of English blood in the maritime counties, as I explain to poor Duggie afterwards.”

“Poor Duggie” was from England, a postwar refugee who had washed up on these shores, down on his luck but with some chicken-farming experience, which it seems was not uncommon then. “Demobilised when the War was over,” explains Rynne, “he found that he could not endure to return to his former job, so he took up poultry, like so many other ill-advised ex-soldiers”.

Alas, the theoretical expertise acquired in a few months of study did not bring practical success. That too was typical of 1920s Britain, Rynne writes: “There are as many graves of wrecked poultry farms as of dead soldiers; in fact, the blasted hope of a poultry farm is almost a symbol of post-War rural England.”

Rynne was himself born in Hampshire, but of wealthy Irish parents who moved home in his early childhood. He was a committed Catholic and nationalist. Indeed, it was partly out of practical patriotism that, after an education in Clongowes and UCC, he became a farmer, which some of his friends thought insane.

But he was no anti-English fanatic. His political heroes included William Cobbett and he preferred Chesterton to Joyce. Whatever the truth of his substantive point, we can assume that his blaming English planters for the alleged intellectual shortcomings of Irish midlanders was a joke at poor Duggie’s expense.

It was not the ministerial appointments row that set me searching Rynne. It was my latest read, the epic Count of Monte Cristo by Alexander Dumas, which, being set in and around the Mediterranean, also includes some pithy reflections on the nature of maritime communities.

At one point, for example, the hero falls in with a group of smugglers who ply the sea routes between France, Italy, and North Africa, and notes the importance among them of a functional multilingualism.

This means they can avoid interpreters – always a risk in their line of work – and communicate directly with their strategic contacts: “persons without name, country, or apparent calling, who are always seen on the quays of seaports, and live by those hidden and mysterious means which we must suppose come in a direct line from Providence, as they have no visible means of existence”.

Maybe Dumas and Rynne were diagnosing something similar, a tradition in coastal communities of people living on their wits and what the tides bring in and out. Not that even Ireland’s busiest ports have much in common with Marseilles, or Genoa, never mind Algiers. But they have more sea to deal with, at least.

Indeed, in defence of Irish midlanders, it should be noted that Dumas considered his smugglers to live in a sort of midlands too. From Arabic to Provençal, he writes, their captain had a smattering of all the languages spoken “on the shores of that large lake called the Mediterranean”.

1 Ireland among countries urged to consider reinstating Covid-19 restrictions
2 ‘I’ve been sleeping with my girlfriend’s sister. I need help. What do I do?’
3 Irish Michelin two-star restaurant to sell kebabs and fries from takeaway trailer
4 Fintan O’Toole: Turning a blind eye to meat plants a very old habit
5 Sinn Féin apologises as member resigns over social media abuse
Real news has value SUBSCRIBE