Blood on the tracks –Frank McNally on the Connaught Rangers Mutiny 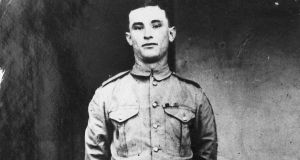 James Daly: executed for his part in a mutiny that began at a barracks in what is now Jalandhar in India on June 28th, 1920

Of the many rail journeys I took on a tour of India in the 1990s, the slowest by far was the one to Simla, formerly Shimla, a Himalayan town that used to be the summer capital of British India.

It was also the most picturesque – the narrow-gauge train winding its way upwards through 20 hill stations, around countless bends, and crossing a thousand bridges, none of them in a hurry. At some points, we would grind to a halt, then shuffle to and fro a bit before proceeding, as if someone had got out to push.

There was no question of making any stopovers en route, so among the towns that passed me by then – in every sense, I’m afraid – was Solan, where a small but infamous piece of Irish history took place 100 years ago this weekend, culminating in the death by firing squad of a man named James Daly.

The facts of the Connaught Rangers Mutiny are still debated a century later. For the Irish protagonists, their motivations were a growing sympathy with republicans at home, anger at British military abuses there, and a realisation that by serving the army in India, they were a local version of the Black and Tans.

The official narrative, by contrast, was that the mutineers were raw recruits, mostly signed up after the first World War, who were merely rebelling against the harshness of military life in an unforgiving climate, and then retrospectively politicised their acts in search of honour and Free State pensions.

What is not disputed is that the events began at a barracks in what is now Jalandhar on June 28th, 1920, when four soldiers refused orders. They were soon joined by others, some of them English. But the protest escalated when two emissaries travelled to Solon (as it was then spelt), a strategic post between Delhi to Shimla, to spread the news.

That was where Private Daly got involved, becoming the most militant of a group that now numbered several hundred.

At first, the mutiny was peaceful. It may even have absorbed the values of Mahatma Gandhi’s campaign against British rule, as local newspapers suggested. Troops were simple refusing to work, while sporting republican rosettes and flying the Tricolour in place of the Union Jack.

But a line was crossed on July 1st when Daly led a party trying to seize rifles from the company armoury. Defending troops opened fire, killing two, and Daly was now a marked man. Fourteen soldiers received death sentences, eventually. Only his was carried out, on November 2nd, 1920. He is still the last member of the British army to be shot for mutiny.

Daly’s body was returned to his native Westmeath in 1970. The other Irish were also repatriated. Only a fourth victim, a Liverpool-born soldier who died in prison, is still buried at Solan. Their location in the Irish republican pantheon, meanwhile, is less well established.

This weekend’s centenary will bring a plethora of commemorative discussions – online, because of current circumstances. They include a Facebook talk on Saturday by Dr Conor McNamara of NUI Galway, and one on Sunday by historian Conor Kostick, via Zoom. Sunday will also feature a podcasted panel discussion of the subject by History Ireland.

Back in 1920, one of the possibilities raised by the mutineers was that of joining forces with the Indian independence movement. This was certainly plausible, even if it didn’t happen, because there was a lot of cross-pollination between the two causes.

Among the foreign students at UCD in 1916, where Thomas MacDonagh taught him, was VV Giri, later president of India. He was ordered to leave after the Rising, because of the company he kept. Three years later, at the “Irish Race Convention” in Philadelphia in 1919, speakers included another Indian nationalist, Lala Lajpat Rai, who predicted that soon “there would be more Sinn Feiners in India than in Ireland”.

When you finally reach Simla, by the way, after six hours on the toy train, a statue of Rai is among the things that greet you. It was erected originally in his native Lahore, but relocated after independence and partition, which he didn’t live to see.

When in 1928 the colonial government set up a commission to consider India’s future, but with no Indian representation, he was one of those who led non-violent protests. Lahore police baton-changed the march, with the local head of police personally assaulting Rai. He died of his injuries a fortnight later, although he had managed to address the crowd after the attack, declaring that “the blows struck at me today will be the last nails in the coffin of British rule in India”.