The Full Monte – Frank McNally on tackling a 1,100-page classic of lockdown reading 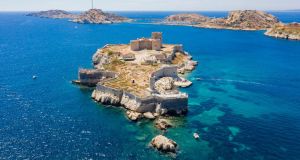 If there was little else to recommend it, the first half of 2020 has at least been a chance to catch up on classic books I should have read years ago but never got around to for various reasons. The latest example is The Count of Monte Cristo, by Alexander Dumas.

It was a sensation when first published in 1844 and has enthralled generations of readers ever since, with the exclusion of me until last weekend, when I finally bought a copy.

And sure enough, on picking it up, I raced through the first 100 pages with hardly a pause. Only another thousand to go now.

The book is ideal lockdown reading, in more ways than one. As it opens, in the month of February 1815, the hero is about to get married. Then, like many people who had similar plans as recently as recently as February 2020, his are suddenly thrown awry by an event he could not have foreseen.

He finds himself instead in the dungeons of the Château d’If , a French version of Alcatraz off Marseilles, wondering what just happened. That’s as far as I’ve got so far. For now, the character’s plight remains in harmony with the circumstances in which I’m reading about it. Both of us still have hopes, albeit fading, for a return to normal life soon.

The novel’s historic backdrop is Napoleon’s escape from Elba and the “Hundred Days” that followed. There are interesting parallels there too because, for the monarchists of Europe, the revival of Bonapartism was not unlike the release of a deadly virus. It too started in what is now northern Italy, spread to France in March, had its worst effects in Belgium, and set governments all over Europe panicking.

Like the Hundred Years War, the Hundred Days is an undercalculation. From the date Napoleon left Elba until Waterloo was 113 days, for example. The more traditional count runs from his arrival in Paris on March 20th until three weeks after Waterloo, when King Louis XVIII was restored. But even that was 111 days.  Either way, the outbreak was all over by mid-July, a deadline unlikely to be matched by our current pandemic.

The Château d’If is a mere tourist attraction now and was on the way to being one even in 1867 when Mark Twain visited it. Twain usually saw the funny side of things but, as described in his book The Innocents Abroad, the grimness of the island prison overwhelmed him. What most struck him was how, in their despair, the inmates all seemed to have had one common urge – to carve their names on walls: “We loitered through dungeon after dungeon, away down into the living rock below the level of the sea, it seemed. Names everywhere! – some plebeian, some noble, some even princely. Plebeian, prince, and noble had one solicitude in common – they would not be forgotten! They could suffer solitude, inactivity, and the horrors of a silence that no sound ever disturbed, but they could not bear the thought of being utterly forgotten by the world.”

That silence is one of the more fanciful explanations I have seen for the château’s name. The most obvious derivation is that, in French, “if” means “yew”. But if the island was ever synonymous with yew trees, it has been devoid of them – and most other vegetation – since the fortress was built several centuries ago

Funnily enough, the yew is a conspicuous absentee from the French revolutionary calendar, which abolished religious holidays in favour of a scheme whereby each day was dedicated to a plant, animal, or implement from the agrarian economy. But elsewhere, yews have an ancient history of symbolism. The Celts associated them with silence and stoicism. And from Ireland to Normandy, at least, they were also symbols of immortality, hence their ubiquity in graveyards.

The downside of reading about Mark Twain’s visit is that he also mentions the story of another prisoner in Dumas’s book who has a plan to escape, involving a lot of slow, painstaking work.

As Twain also explains, the man makes a dramatic breakthrough eventually, although not the one he’s expecting. In reading this, before I realised it, he had given a big part of the plot away, and me with 995 pages still to go.

Oh well. I’m sure there are many other twists and turns en route, so I suppose I’ll carry on. It’s not as if there are all that many other things to do in the evenings now, even with the release from lockdown.

Normal life remains on hold. Pending a breakthrough from somewhere we may still be facing months, if not years, imprisoned in the Castle of If.