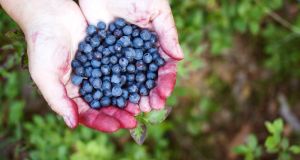 The Fats Domino classic Blueberry Hill may not sound much like a folk song, but on closer inspection, it has all the necessary elements.

It’s a simple musical tale of love and loss. It celebrates a place, and nature. And having as it does a sub-plot of climbing mountains, in summer, it may even have roots in an ancient tradition: the one that will see thousands of people ascend Croagh Patrick this weekend.

Blueberries are the cultivated American cousins of the bilberry, a fruit of many names. The latter is also known as whortleberry, heatherberry, huckleberry (as in Finn), and quintessentially, in Ireland, as the fraughan. And like those, the wild versions of the blueberry grow in high places.

This was a fact lost on at least one music publishing company when Larry Stock, the man who co-wrote the song in 1940, first tried to sell it.

A leading publisher turned him down “because, he claimed, blueberries don’t grow on hills”. Stock countered that he had picked them on hills himself as a boy.

But it was no use, and a different publisher, more at one with nature, made a lot of money from a ballad that would be covered by countless singers before and after the Domino version.

No Irish publisher could have made such a mistake, because the picking of fraughans at this time of year, and the associated hill climbing, is deeply rooted in Irish life, or at least it was then.

In fact, it became an unusually profitable concern during the war years, thanks in part to a legend in Britain that eating bilberry jam could improve the night vision of RAF pilots.

Pots of jam were popular gifts in army food-hampers already, so the eyesight theory may have arisen from confirmation bias among those who would have shot down enemy planes anyway.

There is no scientific basis for it, as far as I know. But it helped make the humble fraughan a much-prized export.

It was prized on the home front then too. In a famous Irish memoir of 1943, Malachi Horan Remembers, the eponymous south Dubliner looked back on almost a century of life in the hills of Tallaght. “We lived well,” he recalled of his diet. “We would have stirabout and sweet milk and wheaten bread made fancy with fraughans from Seechon Mountain, sun-dried and used like raisins.”

Just as the bilberry has many names, so does the day on which it was most traditionally gathered: the last Sunday of July. At least one, Fraughan Sunday, gives the fruit top billing. So in fact does Hurt Sunday, which might sound like a day for penitential flagellation, but is yet another version of the berry’s name, from a contraction of “whortle”.

But it was also called Garland (or Garlic) Sunday, Black Crom’s Sunday (or Domhnach Chrom Dubh), and the name with which Croagh Patrick is synonymous, Reek Sunday. And like that one, some of the names, including Height Sunday, suggest that climbing was an end in itself.

The ascent of mountains in late July was central to the ancient harvest rituals suggested by folklorist Máire MacNeill in her great 1962 book, The Festival of Lughnasa. MacNeill studied 195 sites believed to be associated with the date, including Croagh Patrick, to build up a picture of what used to happen in pre-Christian times.

Among other things, she concluded that the events there had once dramatised a struggle for the harvest between two gods, one (Crom Dubh) who wanted to keep it for himself, and the other (Lugh) who wanted to share it with mankind. The good guy always won, to the accompaniment of human customs that ranged from the gathering of bilberries to the sacrifice of a bull.

But harvest ceremonies must also have been a time for romance. And here’s MacNeill quoting from the national folklore collection a custom recorded in Kilkenny in 1942 (although presumably of much older origin), in which the young men of a district climbed a hill to pick fraughans, then presented to various young women who were “commanded” to make a Fraughan Cake: “This was an honour conferred on the girls because each boy came and took that girl as well as the cake to the Bonfire dance. The boys also provided wood for the Bonfire. [Then] they danced and ate alternately well into the small hours of the morning.”

Which brings us back to where Fats Domino found his thrills. He may not have had Fraughan Cake, but not much else was different. Whether he knew it or not, the Irish ancients had been up the hill, on a similar mission, centuries before him.