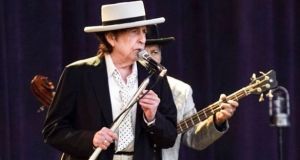 On the way to the Bob Dylan/Neil Young concert in Kilkenny on Sunday, I fell into conversation with an exotic-looking woman of a certain age (65 she later told me) who introduced herself with a phrase I couldn’t catch and then said: “I’m Welsh – we’re your cousins.”

She was an old hippy, clearly – I imagined flowers in her hair once, although now the only decorations there were dreadlocks. And she called me “babe” and “hun” a lot. But she also introduced herself to several other strangers within earshot, all with the same phrase I couldn’t catch and then: “I’m Welsh – we’re your cousins.”

She was very adamant on this point because, as I also learned, she was vehemently opposed to Brexit, which she blamed on the (expletive deleted) “E*gli*h.” She knew it would cause Ireland big problems, but it would also break up the union, she assured me. Even Wales, although it voted Leave, would go it alone.

I held up my hand to give her five, but she made a fist bump instead, and we missed

Not that she was upset about this. Her list of the things England had done to Wales historically made Phil Bennett’s pre-match pep talk from the 1977 Five Nations sound like the queen’s speech.

“We used to burn their holiday homes back in the 1970s,” she confessed at one point. Then she squeezed my arm conspiratorially and said: “But you guys did that too, babe.”

And before I could plead an alibi, she was on to something else.

By now we had arrived at Hebron Road, the strangely named location of Nowlan Park, which set me wondering why a road in Kilkenny should be called after a biblical city on the West Bank. And while I was wondering this, I missed the start of a story our Welsh cousin was telling about King Charles I and a vote in the English parliament that led to his downfall.

When she finished by asking, with a knowing look, “And what do you think the vote was?” I couldn’t even guess. So she told me, with a laugh: “Fifty-two, forty-eight!” And she enjoyed this 17th-century Brexit omen so much, she said: “Give me five, hun”.

I held up my hand to give her five, but she made a fist bump instead, and we missed. Then a helicopter passed overhead, and when she shouted that expression I couldn’t catch again, this time skyward and directed at “Bob”, I wondered briefly how she knew that the helicopter pilot was called “Bob”. Then I remembered where we were.

I was worried my own reflexes might not be able to cope, and was very relieved to find myself rolling with the punches, still upright, two hours later

Meanwhile, back at ground level, the 1979 popemobile suddenly appeared, on an outing from the National Wax museum. And for a weird moment, what with the helicopter and the popemobile and my visions of the West Bank, and a dreadlocked Welsh female pensioner talking about King Charles I, I had the weird sensation of being trapped inside a Bob Dylan song, from the years he was on drugs.

That passed quickly, but it was a strange thing in itself to be going to see two giants of 20th-century rock music performing in a provincial GAA pitch, especially in a double-header that suggested the traditional format of a first-round championship match.

Despite his surname, Neil Young was a bit mature to be playing minor. And yet he did – albeit with a Heart of Gold and a slightly different spelling – at one point, charmingly.

As for Bob, I was half-dreading his show, not having seen him live since Slane, half a lifetime ago. A while later, he had undergone his infamous epiphany, redesigning his vocal style and songbook in a way that Picasso redesigned people’s faces.

The mixed reviews had put me off going back until now. But it wasn’t only Dylan who had needed to change in the late-1980s, as he wrote in his autobiography. He also needed a new audience, because the old one “was past its prime and its reflexes were shot”.

So I was worried my own reflexes might not be able to cope, and was very relieved to find myself rolling with the punches, still upright, two hours later.

Not only that, but my teenage sons, who I had dragged along for their education while fearing it was child cruelty, were visibly entertained. The younger one even professed to have enjoyed Dylan’s concert more than Young’s: “It had a different energy”.

I made up for them not being bored then by filling in them at great length on the way home about some of Mr Zimmerman’s many other reinventions, right back to when he swapped his birth surname for that of a famous poet. “Dylan Who?” they asked. Dylan Thomas, I said: “He was Welsh. They’re our cousins.”