At Swim-Two-Birds pays extended homage to the number 3 with three beginnings, three ends and a similar number of plots in between 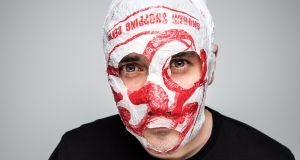 Blindboy Boatclub: listed Flann O’Brien as one of his great heroes, alongside “Bob Dylan and Tom Waits”

Doing an interview as part of the International Flann O’Brien conference during the week, Blindboy Boatclub of the Rubber Bandits listed the writer as one of his great heroes, alongside “Bob Dylan and Tom Waits”.

What set him apart from those two, however, was that he was Irish and used language as Blindboy himself did. So as the latter put it: “Flann was mine”.

Well, having been to both the conference and a Dylan concert in recent days, I’ve been struck by how much the two men had in common.

The conference set me re-reading parts of At Swim-Two-Birds, whereas the concert caused me to revisit Dylan’s autobiography Chronicles. And in both cases, at times, I felt I was in the hands of a master comedian.

You never quite know with Dylan when he’s being serious.

There’s a long passage in Chronicles, for example, where he discusses his mid-performance crisis of the late 1980s, which resulted in him not just finding a new way to sing his songs but a new way to play guitar as well, one that would transform his work.

The guitar style had been shown to him back in the 1960s by a jazz and blues player called Lonnie Johnson, who imparted it as “something secretive” with the words: “This might help you”.

But Dylan had never used it until now, when the principles suddenly came back to him in his hour of need.

So far so plausible. It’s when he starts reducing the system to a question of numbers, specifically odd ones versus even, that you begin to wonder if he’s having us on.

Here’s how he sums up the limitations of the old way: “Popular music is usually based on the number 2 and then filled in with fabrics, colors, effects and technical wizardry to make a point. But the total effect is usually depressing and oppressive and a dead end which at most can only last in a nostalgic way.”

And here he is on the new one: “If you’re using an odd numerical system, things that strengthen a performance automatically begin to happen and make it memorable for the ages”.

After a long elaboration of this that hovers between science and poetry, he sums up: “I’m not a numerologist. I don’t know why the number 3 is more metaphysically powerful than the number 2, but it is.”

Now, in general, the close relationship music and maths is not new either.

Pythagoras discovered it 2,500 years when he was strolling past a blacksmith’s one day and noticed how the simultaneous fall of different-sized hammers on an anvil produced consonance or dissonance depending on the combinations. Or at least, Pythagoras would have noticed that, if the story wasn’t fictional.

But as Dylan tells it, the way he was to play music from about 1988 onwards, being founded on universal laws, would be irresistible to listeners.

He expanded on this in a Rolling Stone interview, saying the system produced music that “gets under somebody’s skin and there’s really nothing they can do about it, because it’s mathematical”.

Which may well be true, although the counter argument is that, in the decades since Dylan’s music underwent this transformation, large numbers of people have remained severely resistant to it.

Rather than get under their skin, it seems to make it only as far as their skin’s surface and then cause them to break out in a rash. This was still happening as recently as last Sunday.

Anyway, getting back to Flann O’Brien, he had some interesting ideas about maths too. Although, for example, his debut novel name-checked the number 2 in its title, At Swim-Two-Birds, it also paid extended homage to the number 3, having three beginnings, three ends, and a similar number of plots in between.

Mind you, in the final end (that’s a phrase from Dylan by the way), Flann seems to suggest that it is all a matter of human foible, really.

Some otherwise normal people are obsessed with certain shapes or colours, he writes. But the “great proportion of unbalanced and suffering humanity” are victims of a numerological disorder. Hence the famous closing lines of ASTB: “Well known, alas, is the case of the poor German who was very fond of three and made every aspect of his life a thing of triads. He went home one evening and drank three cups of tea with three lumps of sugar in each, cut his jugular with a razor three times and scrawled with a dying hand on a picture of his wife goodbye, goodbye, goodbye.”