The Irish Times view on Boris Johnson and Northern Ireland: Anglo-Irish ties must be maintained 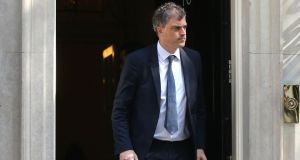 Julian Smith, who was the British government chief whip for the past 18 months, is a senior and experienced figure unlike his predecessor Karen Bradley who was prone to gaffes and often appeared hapless during her time as Northern Secretary. Photograph: Isabel Infantes/AFP/Getty Images

The visit of newly appointed Northern Secretary Julian Smith to Belfast to meet Tánaiste Simon Coveney and the five Northern parties so soon after his appointment was encouraging against the background of the worrying deterioration of relations between the governments in Dublin and London following the accession of Boris Johnson as prime minister.

During his visit Smith was also briefed by Northern Ireland Office officials on the state of talks designed to restore the Stormont Executive and Assembly, which have been going on for the past few months. Smith, who was British government chief whip for the past 18 months, is a senior and experienced figure – unlike his predecessor Karen Bradley who was prone to gaffes and often appeared hapless during her time as Northern secretary. To be fair to Bradley, she worked hard in recent months to keep the talks process going and deserves credit for that.

The new Northern Secretary has been through the mill as chief whip in the various attempts to get Theresa May’s Brexit withdrawal deal through the House of Commons and that testing experience should have given him a taste of the arduous task that faces him in attempting to get the Northern parties to agree a deal. In his role as chief whip Smith worked closely with the Democratic Unionist Party (DUP) in the implementation of their confidence-and-supply deal with the Conservative government and he also negotiated unsuccessfully with them in an effort to back the withdrawal agreement in the Commons.

Sinn Féin expressed suspicion of Smith because he attended a DUP conference as part of his duties as chief whip. His intimate knowledge of where the party is coming from may actually help him in his efforts to broker a deal and at the very least he won’t have to waste time getting up to speed on where the party stands. What may constrain him is the fact that the Johnson government, like its predecessor, is dependent on the DUP for its survival in Westminster.

The DUP has expressed initial enthusiasm for Johnson, but there are good reasons to believe that getting what it wished for could well end up in an economic disaster for Northern Ireland. The DUP will have to accept responsibility for the consequences of a no-deal Brexit if that happens.

As well as working to restore devolved government in the North, Smith could have an important role to play in keeping lines of communication open between the Irish and British governments. The Tánaiste described yesterday’s meeting as useful and that was a good start. British-Irish relations are now at their lowest in a generation and it is vitally important that the rupture does not grow and fester. Regardless of how Brexit turns out, the two countries have a strong interest in maintaining the best possible relationship in the years ahead.

1 Three relatives dead after apparent murder-suicide in Kanturk, Co Cork
2 Don McLean: ‘My ex-wife is the worst person I ever knew’
3 Gardaí not seeking anyone else in relation to Cork shooting deaths
4 Cork suspected murder-suicide may have been over disputed will
5 Gardaí say 52 people who went missing in 2020 not yet found
Real news has value SUBSCRIBE