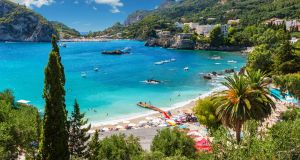 It may be a little-known ailment but it turns out Islomania is an affliction that drove a desperate band of souls, including this victim, from all around the world to the Ionian island of Kerkyra – or Corfu as blow-ins call it – for some therapy earlier this summer.

Framed around the lives and literary legacy of the famous Durrell family who lived on the island from 1935 to 1939, Islands of the Mind – a festival of psychology, literature and biodiversity – was directed by islomane Richard Pine and organised by the Durrell Library of Corfu, with support from Culture Ireland.

Pine set sail from Ireland in 2001 “to step across the threshold into the kingdom of the imagination”, where a landscape surrounded by the sea suspends time and allows the transcendence of the poetic experience over the causality of logic.

Of course, as keynote speaker Godfrey Baldacchino, professor of sociology at Malta University, argued, islands can be prisons as well as paradises – the more famous include Tasmania and Alcatraz, or we can even look closer to home to Spike Island, where its former prison was founded at the height of the Great Famine.

Indeed, Pine reminded us during the festival, that all we have to do is reflect on the recent experiences of Syrian refugees on the Greek island of Kos to be brought back to the brutal realities experienced by our fellow human beings. They do not have the luxury of searching for the “Heraldic Universe”. This is Lawrence Durrell’s term for the above-mentioned poetic quest to islands. They provide a safe haven for the melding of the emotional subconscious with the logic of the intellect, affording the writer the perfect protected space for artistic epiphanies.

Responding to Pine’s paper on the subject, Ciarán Benson, professor emeritus of psychology at UCD, addressed the commonality of such a pursuit in both literature and philosophy, citing Buddhism and Greek and Roman Stoicism as examples.

Interestingly, he referred to a question put to James Joyce once about why he never returned to Ireland, to which Joyce replied: “Have I ever left it?”

For this islomane the voyage from the old port in Corfu town by caique, a traditional Corfiot fishing boat, to the White House at Kalami, on the northern shores of the island, was a particular highlight of this wonderful week-long festival.

Writing in Prospero’s Cell, effectively his island diary, on April 29th, 1937, Lawrence describes the first sighting of their iconic home as they landed by sea from the old town of Corfu: “A white house set like a dice on a rock already venerable with the scars of wind and water.”

While back then, their backdrop was “a bare promontory with the beautiful clean surface of metamorphic stone covered in olive and ilex”, its colonisation by villas and apartment complexes in recent decades scars the bare rock with a deep touristic footprint.

Indeed, this was bemoaned by naturalist Gerald Durrell, whose famous trilogy My Family and Other Animals, a chronicle of his idyllic life on Corfu, is the inspiration for the wildly popular ITV series The Durrells.

Gerald was only 10 and the youngest of the Durrells when he moved to Corfu with his widowed mother Louisa and older siblings, Lawrence, Lesley and Margo. In fact Lawrence, or Larry as he was known in the family, was married to his first wife, artist Nancy Myers, who also accompanied them on their Ionian odyssey.

While these young newlyweds may have seen Kalami and Corfu as their Eden, and the nymph-like Nancy as Larry’s muse, the reality was rather different due to his well-documented misogyny, which ultimately led to their divorce.

Thus, the fact that Nancy’s daughter (not by Durrell), author Joanna Hodgkin joined us for lunch and made a presentation in the White House was very important in the balancing of Nancy’s silence and subjugation, as it were, in Prospero’s Cell. Moreover, it provided some gender balance to some of the other presentations where the reverence towards Lawrence Durrell’s literary genius conspicuously ignored his deeply flawed nature and objectification of women, which from a feminist perspective should have been addressed in the round to explore the central theme of the festival.

Perhaps, if Lawrence Durrell had sailed instead to An Blascaod Mór – which was the subject of Éilís Ní Dhuibhne’s paper – the harsh realities of life on the edge of the Atlantic may have modified his crusade for “a realm where unreason reigns”. Of course, one imagines his final resting place then would have been on the mythological island of Hy-Brasil rather than Atlantis.

1 Covid-19: Taoiseach warns of restrictions in Ireland’s cities as hospital cases pass 100
2 Dermot and Dave’s Dermot Whelan mindfulness exposed as sly act of self promotion
3 Brendan Gleeson as Donald Trump: ‘A mediocre impression and possibly a great performance’
4 Only someone who wouldn’t miss €50 a week would cut the PUP
5 People asked not to cross Border as Donegal prepares for Level 3 restrictions
Real news has value SUBSCRIBE