Hogan’s Heroes – Frank McNally on an Irish link to one of the 20th century’s greatest soccer teams, the “Mighty Magyars” 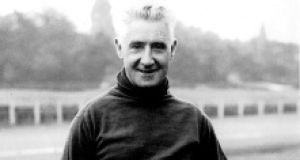 Jimmy Hogan during his first spell at Aston Villa, circa 1936. Photograph: Courtesy of the Aston Villa Archives

When the “Mighty Magyars” of Hungary beat England 6-3 at Wembley in 1953, they humbled the team from the self-declared home of football. It was an early warning that the “continentals” were pulling ahead of the English in technique and tactical awareness. But this harsh lesson from Eastern Europe had roots much closer to home, and some of them had been sown in Co Mayo.

After the game, the Hungarians paid tribute to the man they believed had brought them to this point.

“Jimmy Hogan taught us everything we know about football,” their federation president told the press.

“When our football history is told, his name should be written in gold letters.”

Hogan was English by birth, but his mother was from Ballina in Co Mayo and had emigrated in her teens, not long before her first son was born in 1882.

Like another Mayo emigrant, Michael Davitt, who spent part of that year in an English jail, Jimmy Hogan would grow up in Lancashire.

And like many a Catholic eldest son, he would have become a priest, if his devout mother had had her way. But after spending three years in a seminary, he left aged 17, to her great disappointment.

He was to find a vocation in football instead, although in his approach to preparing teams and players, he may have brought the principles of the cloister with him.

As a player, he was nothing special, and was debilitated by chronic injury in his later years.

He did, however, win a second division championship with Bolton Wanderers in 1909, which led to a pivotal event in his career: a Football Association-sponsored club tour of Holland that summer.

When he returned to the Netherlands as coach in 1910, it was the start of a career that would blaze a trail across mainland Europe.

His next big move was to Vienna, where he teamed up with Hugo Meisl, another very influential figure in the development of European football.

Meisl was Jewish, and in a forthcoming biography of Hogan, subtitled “The Greatest Football Coach Ever?”, Ashley Hyne argues that the contrasting spiritual backgrounds of the two men combined in a system that required players to commit themselves, “like religious devotees, in mastering control of the football, so that they could head, pass, strike and, with various parts of the body, trap the ball”.

This may seem a bit obvious now, in the era of Pep Guardiola and Jurgen Klopp. But the approach was revolutionary then, and they were slow to accept it in England, when Hogan would return as a manager in the 1930s.

In the meantime, he spent the early part of the first World War in an internment camp, while his pregnant wife had to beg for rations in the streets.  She was eventually repatriated. He was sent to Hungary, and the MTK club of Budapest.

There, building on the work of a great Scottish coach, Jackie Tait Robertson, he produced a team that would win seven consecutive league titles and, in the process, lay the foundations for what happened in Wembley and elsewhere in the 1950s. He later had spells in Switzerland and Germany, and returned to Vienna to reunite with Meisl on the Austrian “Wunderteam” of 1931-2.

One of Hogan’s innovations in Austria had been to stress the importance of a controlled diet, cutting down on the amount of meat players ate and adding more fruit and vegetables.

Again, this seems elementary now, but it was among the things that ensured, on his return to England in the 1930s, he was still too far ahead of his time to be appreciated.

The hostility of senior players led to him being sacked by Fulham in 1934, where the board declared that “seasoned professionals do not need coaching”.

This was still conventional wisdom in England then and later. So was the idea that footballers should be kept away from the ball as much as possible in training, so that they would be hungrier for it on match-day.

Hogan was manager at Aston Villa at the outbreak of the second World War.

After the war, he returned as a youth coach. Proud of his country of birth, he was always warning that football there would be overtaken if it didn’t evolve.

In 1953, he is said to have brought a group of his apprentices to the game in Wembley, confident they would see “something memorable”.