Ireland must rethink strategies in a new geopolitical era

World View: Irish policy has to think its way into a sphere of weaponised soft power 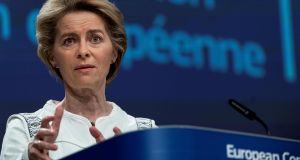 The new European Commission is “truly geopolitical”, according to its president Ursula von der Leyen, who took office this week. By this she means it must respond to rapidly changing international realities in the distribution of global power.

China’s arrival as a frontline power, the United States decoupling from postwar multilateral commitments on politics and economics, Russia’s disruptive role in Europe, a turbulent neighbourhood in the Middle East and Africa and climate breakdown all feed into these changes. If the European Union does not become a key global actor it will lose influence – that is the mantra driving Von der Leyen’s team. They say the commission must wake up from its geopolitical slumber.

Nato’s 70th birthday summit this week illustrated several of these forces at play, as Germany, France and a departing UK responded differently to Donald Trump’s transactional view of the transatlantic relationship. The Germans disagree with French president Emmanuel Macron’s view that Nato is brain dead and that the EU must assert a more sovereign role in defence and security as well as in other spheres, including by resetting relations with Russia more positively. In the general election the UK is making a huge choice about its positioning through and after Brexit.

Germany’s political transition exposes its reactive and defensive role in this debate compared with French dynamism. German voices are more cautious about geopolitics because its classical concerns with imperial power and space were exploited by fascist theorists and practitioners during and between the two World Wars. The EU’s commitment to normative multilateralism and geoeconomic rather than geostrategic priorities better fit German political culture.

Macron’s intellectual activism is in sharp contrast and frames the new commission’s mandate more effectively even if he cannot expect to get all his way. Recent speeches and interviews survey this changing world scene confidently and with an acute awareness of French interests.

He draws on well-established French critiques of unilateral US power, Anglo-American influence and how emerging multipolarity can boost alternative accounts informed by European experience. He says regulatory competition with China and the US on climate, digital and cyber issues can set world standards. His support for a stronger euro regime chimes in with wider dissatisfaction over German complacency on the matter. A recurrent theme is the need for France and Europe to balance other world powers as these changes proceed.

An impressive group of French analysts and researchers on political economy echoes Macron’s concerns. Gabriel Zucman from the University of California has become the major analyst of growing wealth inequalities in the US and how to tax corporations and the super-rich more effectively to counter them – including in his analysis of Ireland as a tax haven. He draws on Thomas Piketty’s work on capital and inequality to do that.

Thomas Philippon’s new study The Great Reversal contrasts the strong competitive position of the US 20 years ago on digital, transport and incomes, when he arrived there from France, with its oligopolistic and more unequal one today. It has lost its competitive edge as a result of corporate capture of policymaking through lobbying and the exorbitant cost of political campaigning. As a result Europe’s competition regime makes it more dynamic, innovative and capable of setting world standards than a US which has lost its cutting edge.

Christine Lagarde’s role as head of the European Central Bank and her commitment to make climate more central to its work adds to this picture of French policy energy. It sharpens up the EU’s soft power, pushing it to become harder, smarter and sharper on the world stage, according to Zaki Laidi, an international relations theorist in Sciences-Po. He says soft power is becoming weaponised particularly through US-China rivalry and digital technology.

The new commission feeds into this policy mix and is influenced by it. Irish policy needs to think its way into this sphere as its geopolitical anchorage between the EU, the US and the UK, stable for the last generation shifts profoundly. That exposes Ireland to several new challenges, Brigid Laffan of the European University Institute recently told the Royal Irish Academy in a public discourse available online.

They include a need to rethink policy on corporate taxation and European security. Ireland also needs to think carefully about its position as a small state vis-à-vis France and Germany. The recent alignment with the Hanseatic group of northern liberal states led by the Netherlands is disliked by the French and risks alienating southern and eastern EU members.

1 Una Mullally: Those attacking Sinn Féin have become cheerleaders in reverse
2 Why our love for Leo is withering on the vine
3 Dancing with the Stars: Glenda Gilson sinks like Titanic
4 The five ‘hidden’ reasons that stopped me losing weight
5 No obvious signs of injury on remains of McGinley children
Real news has value SUBSCRIBE