Abusive language and physical intimidation are targeted at women cyclists 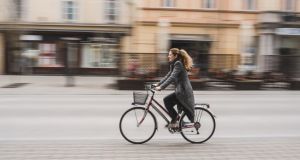 “Catcalls, stones thrown at us, abusive language and physical intimidation that targets us because we are women – there are plenty of reports of it on social media.”

The confident way you hit me, your arm striking across my back, I wonder if this is your first time taking aim at a woman.

It’s a sunny day, I’m on my bike recording an audio tour about women’s experiences of cycling in Dublin. My microphone is on the handlebars, picking up the quiet sounds of the canal: a few cars, some birds tweeting, chats between office workers going for lunch.

You’re wearing a navy blue suit and tie, you’re talking on the phone as you wait at the pedestrian crossing.

You hit me just as I pass in front of you. I get off my bike and run after you along the canal, you are still talking on your phone.

“You assaulted me,” my voice is angry on the recording. “And you’re walking away as if it doesn’t matter”.

“Hold on, I’ll call you back,” you say into the phone. You call me lady, your voice is mocking.

“How dare you hit me,” I’m walking alongside you, still recording.

“Learn to ride your bike,” you say. I want your details – you tell me to go to the police.

Your phone rings. Sorry Seán, you say. You’ve almost reached the bridge by now. I take a photo of you and turn back, I have to get my bike.

I go to Pearse Street station to make a report. Section 2 assault, the guard says immediately. I play the recording for him and tells me that you as good as admit hitting me. He takes a statement. Later, he goes to the location to see if there was CCTV but there’s none available. The case is on hold, we’re trying to match up your photo.

Last week, I represented Dublin Cycling Campaign at the Joint Committee for Transport, Tourism and Sport. I spoke about your assault. “Is this general hostility to cyclists, as opposed to sexual harassment?” Fianna Fáil TD Marc MacSharry asked. I don’t think a man would hit another man in these circumstances, I replied, or tell him to learn to ride a bike.

MacSharry listened as we described abuse that targets women who cycle; research from Green Schools shows that most teenage girls have stopped cycling in part due to verbal harassment by teenage boys and men. Fewer than one in 250 teenage girls in Ireland cycle to school.

Catcalls, stones thrown at us, abusive language and physical intimidation that targets us because we are women – there are plenty of reports of it on social media. Men commuting to work in Lycra shouting at you if you’re going too slowly; how dare you get in the way of their best time.

Women are considered “indicator species” for bike-friendly cities; 55 per cent of the people who cycle in the separate, well-marked lanes in the Netherlands are women. Is it any surprise that so many women look at the hostility on Dublin’s streets and decide not to cycle; fewer than one in three people cycling in Dublin are women.

I’ve never seen it myself, colleagues say, as if therefore it might not be happening. Street harassment isn’t new: according to Plan International’s 2018 ‘Safe in Ireland’ research, almost half of women say they have experienced verbal abuse in public; more than a third say they have been subjected to physical harassment in public.

It’s not just the intimidation, it’s the work we do to avoid it: steering clear of areas known for speeding, where bike parking isn’t well-lit, as well as areas where there may be antisocial behaviour. The areas to avoid will vary by day and night as we navigate Dublin, determined to enjoy the benefits of cycling in the city.

But research indicates that we really are more at risk on the roads. County planners in Minnesota undertook research into passing distances in 2017 using radar mounted on bikes, both women and men researchers cycled the bikes around the city. They found that the mean passing distance for the women was 68 inches, for the men this was 71 inches. Seventy-three per cent of the close passes targeted the women researchers.

As for the man on the canal: for you, hitting a woman seemed as normal as taking a phone call during your lunch break. The fear stayed with me for a few days. But I love cycling, the freedom of it, the wellbeing from going for a spin between meetings. I’m not going to let a man take that away from me.