Breda O’Brien: We must honour our history and welcome the stranger

Between extremes of open borders and xenophobia, there is a generous Ireland 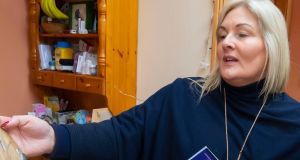 Verona Murphy’s remarks about migrants being indoctrinated by Islamic State (Isis) may do her less harm at the ballot box than her apology.

It would be wonderful to be proven wrong. But most people tend to vote pragmatically and not on principles. People often vote for the people most likely to deliver on promises, particularly if a candidate looks as if she or he has a chance of helping to form the next government.

And there are lots of people who think pretty much the same about asylum seekers as Murphy does. I am not talking about Ireland’s minuscule far-right groupings, whose numbers are so few that they could probably all be comfortably accommodated in a medium-sized shipping container if they ever decided to get together anywhere except at every community meeting about asylum seekers held four counties away from them.

I am talking about the people who will earnestly tell you that we are far too generous to those seeking asylum and that we need to look after our own.

Strangely, in my admittedly unscientific Venn diagram of people I know, the overlap between the circles of those looking after our own with those also looking after the foreign stranger tends to be reasonably large.

On the other hand, the overlap between those claiming we need to look after our own and those actually looking after our own tends to be remarkably small.

While the cynic in me believes that targeting asylum seekers will never hurt a politician – just like targeting travellers never does – my inner idealist wishes that Murphy was not just spouting belated public relations-inspired spin when she said that visiting the reception centre in Clonea, near Dungarvan, had changed her mind.

The cure for fear is encounter. You can fear Isis-indoctrinated three year olds until you meet a Muslim child with a very cute Deise accent she picked up from the elderly nun who is teaching English to asylum seekers, and realise that the child’s family had to flee from an Isis-affiliated group because they were the wrong kind of Muslims.

And even though they do not get as much publicity as the naysayers, lots of Irish people are encountering asylum seekers and making them welcome.

They are in running clubs with them, they are picking up rubbish with them for Tidy Towns, they are volunteering alongside them in charity shops and they are teaching them basic programme-making skills in the local community radio station.

They find that the strangers are people like themselves, with fears and hopes, with good days and bad days

And oddly enough, they find that the strangers are people like themselves, with fears and hopes, with good days and bad days.

I know the reception centre that Murphy visited. I went to my first non-school disco there when it was the Clonea Strand Hotel. And like a lot of centres where asylum seekers are housed, it is somewhat isolated and poorly served by public transport.

And like a lot of areas in Ireland, when the reception centre was announced, local people organised. Initially, they collected toys and clothes, then the local soccer club got involved, followed by a big emphasis on cooking together, all to welcome the strangers.

But other cynics might say that was because the reception centre was mostly for Syrians. There is a narrative about the deserving and undeserving asylum seeker, one reinforced by our Taoiseach, who talked about Albanians and Georgians, thereby singling out two groups as potentially bogus.

What he did not mention is that there is virtually no way for people to legitimately migrate to Ireland from these countries. In fact, Ireland has tightened up considerably on all immigration, not just those claiming asylum.

I became aware of this (in an admittedly predictable way) when people began to draw to my attention to the fact that priests from places like Nigeria were finding it hard to obtain visas. Traditionally, it was understood that ministers of religion were no threat to employment in Ireland and provided a valuable service, especially since so many clergy are ageing. Not so much anymore, apparently.

Then I heard about young American Catholic volunteers who were being put through tougher immigration hoops. I suspect it has nothing to do with religion and everything to do with tightening up on migration policy generally.

There is a narrative about the deserving and undeserving asylum seeker, one reinforced by our Taoiseach, who talked about Albanians and Georgians

Albania is a desperately poor country which has haemorrhaged a third of its population due to migration. But Albania has also been a transit country for refugees and migrants since 2015 and, more recently, a country of destination for asylum seekers. The Albanian Border and Migration Police identified more than 3,500 migrants entering Albania between October 2018 and April 2019 after the EU started tightening up their borders. In 2018, we had 3,673 asylum seekers, of whom 459 were Albanians.

We have choices. Not false choices between open borders and xenophobia, which are choices only extremists want. We have a choice of honouring our history as migrants and Christians, by welcoming the stranger, inspired by examples to be found all around Ireland. Or we can reward those who think that strangers are automatically a threat. It is a deceptively simple choice but one with profound consequences.

1 Ruth Negga: ‘People who say they don’t consider skin colour... are you f**king blind?’
2 Bobby Storey: The IRA's planner and enforcer who stayed in the shadows
3 Patrick Freyne: You endearingly sentimental sociopath, I’ve just the show for you!
4 If you are young and live outside Dublin you could be in trouble
5 Coronavirus claims one more life while 11 new cases reported in Republic
Real news has value SUBSCRIBE