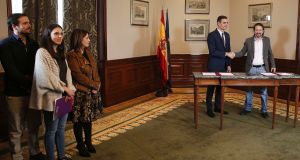 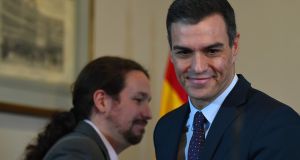 Podemos’s Pablo Iglesias and incumbent prime minister Pedro Sanchez: the two will have a difficult job to persuade smaller groups, including radical Basque and Catalan nationalists, to let them form a government. Photograph: Gabriel Bouys

“Which Side are You On?” is one of the great emotive anthems of the left.

It was written in 1931 by Florence Reece, wife of an American union organiser, after mining company gangsters terrorised her and her children overnight during a legendary strike.

The moral choice it offers sounds very simplistic in today’s much more complex and fractured world: “You’ll either be a union man/or a thug for HJ Blair”.

But perhaps social democratic parties, who claim to come from the left tradition, should ask themselves that question once again.

In their embrace of market economics, they have abandoned their core constituencies, the working poor and unemployed. Yet social democrats affect to be horrified when many of these erstwhile supporters, in their desperation, flock to the hard-right, nationalist siren songs sung by Trump, Farage, Bolsonaro, Orbán and so many others.

The first rude awakening was the surge in support for the neo-fascist party Vox. This group went from zero to 24 parliamentary seats last April, and then leapt to 52 on Sunday, making it the third-largest party in Spain, adding Spain to the growing list of EU countries where democratic values are under serious attack.

Its main trigger is the rise of the Catalan independence movement, which Vox supporters (and many other Spaniards) perceive as a massive threat, not just to Spanish national identity and cohesion, but to their already precarious prosperity. Spain without Catalonia would be missing a vital economic engine.

The second, and related, shock was the collapse of the Ciudadanos (Cs) party, from 57 to 10 seats. Cs emerged in Barcelona as a regional response from Catalans alarmed by the growth of Catalan nationalism. It grew rapidly into a state-wide Spanish nationalist party, apparently of the technocratic centre.

As such, it was well-placed to seize ground from the hitherto monolithic PP, a supposedly centre-right party that actually occupied the entire spectrum from far-right to moderate Christian democrats. The PP, too long in power, was wracked by spectacular corruption scandals.

In recent years, the Cs leader Albert Rivera was widely perceived as the Spanish answer to France’s Emmanuel Macron. There were dreams in Madrid, and in Brussels, that he might be the bridge to a centrist coalition with the Socialist Party (PSOE), Spain’s historic social democratic party.

The PSOE, like our Labour Party, had left many of its voters at the mercy of bankers and developer-landlords following the 2008 economic crisis. It was under serious challenge from Podemos, a new kind of radical left party, born from the Indignados, Spain’s imaginative and impressive version of the Occupy movement.

The PSOE’s chameleon leader, Pedro Sánchez, certainly aspired towards a deal with Cs, but then something strange happened. As the Catalan crisis intensified, Cs began to sound more shrilly right-wing than the PP, making it a very unattractive partner for the PSOE.

It now seemed that Rivera dreamed of leading a right-wing government, with support from Vox and the remains of the PP. It was a hubristic fantasy, and is now in shreds, with Vox eating Cs votes on one side, and a reviving PP picking them up on the other. Rivera resigned on Monday.

The third bombshell from the election exploded on Tuesday afternoon. Sánchez, and Podemos leader Pablo Iglesias, appeared before a disbelieving nation to announce that they were, there and then, signing an agreement committing them to a full coalition government, in which it seems certain that Iglesias, bête noir of Spanish nationalists and the Spanish business class, will be a deputy prime minister.

You may wonder what is so shocking about that announcement, beyond the fact that Spain’s polarised party mindset has not produced a coalition since the 1930s. Surely the centre-left and the left would be natural partners?

However, Spain had, since last April’s equally indecisive election outcome, witnessed all hope of a PSOE-Podemos pact destroyed by increasingly hostile disagreements between the two leaders. Sánchez, spurred by good results in May’s European elections, appears to have believed he could take votes in the centre by humiliating Podemos. Perhaps he even imagined he could still form a post-election pact with Cs.

Left-wing voters were deeply disenchanted as what Iglesias had described as “an historic opportunity” to form a relatively stable left-wing government to confront multiple crises was dribbled away, and they stayed away from the polls in droves.

Certainly, there are major differences between the two parties, which Sánchez had repeatedly presented as irreconcilable during the election campaign. Podemos argues that Catalonia has a right to self-determination, and opposes the EU’s austerity orthodoxy. It favours much more public spending to reboot the economy and, above all, to alleviate poverty. The PSOE rejects these positions.

On election night, however, both Sánchez and Iglesias seem to have recognised that the resurgence of a Spanish fascism that dares to speak its name requires a united response. In Iglesias’ words, “an historic opportunity became an historic necessity”.

Even combined, however, the two parties remain a parliamentary minority, and will have a difficult job to persuade smaller groups, including radical Basque and Catalan nationalists, to let them form a government.

And that will only be the beginning. It will be an enormous challenge to resolve the Catalan crisis, in the face of an increasingly militant and volatile Spanish right. But at least Sánchez has at last decided for the moment at any rate – which side he is on.

Paddy Woodworth is the author of Dirty War, Clean Hands: Eta, the Gal and Spanish Democracy’