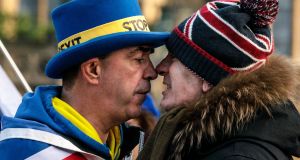 Brexit has created a new political animal in Britain and Ireland. We are fatalistic about the inevitability of change, but wary of the shifts afoot.

We want them to happen peacefully, if at all, inflicting minimum damage to the social fabric, and at tolerable cost – but no more – to the local economy. Unlike our political opponents, we are motivated more by a love of country than a dubious fear of outsiders. If you must put a label on us, you can call us the quiet centre.

In Britain the quiet centre has come to the conclusion that, for all the squabbling, U-turns and treachery, Brexit now seems inevitable. They are only half-joking when we call it the Great British Break-Off. They are a broad coalition, some voted to remain in the European Union in the 2016 referendum.

I do not want Irish unification at breakneck pace, without huge support from the international community

Others voted to leave before coming to their senses. (One is reminded of the prank caller on Nigel Farage’s radio show who said he had voted remain only to change his mind when something monumental happened.

When Farage excitedly demanded to know what had happened, the caller responded, “I was kicked in the head by a horse.”)

On this island, the quiet centre includes members of several political traditions and none. Some of us are erstwhile unionists who voted remain in the referendum but now accept that Britain is leaving the EU.

Others are two-pint republicans: wary of jingoism most of the time, only to drop our guard towards closing time in the pub. Quite a few of us are constitutional nationalists who remember with disgust the actions committed in our name during the Troubles. And one or two of us have no time for politicians of any stripe.

What we all have in common is a determination to ensure that peace prevails, a wariness of simple solutions to complex problems, and a reluctance to drive fast around blind corners.

We are not just one-note nationalists. Rather, we are thoughtful patriots. And the double-haste of the English has lessons to offer us – firstly in their rush to hold a simple-majority referendum over a complex issue; and secondly in their haste to get Brexit done, if only to begin the task of reuniting a fractured society.

Let us hear from the proponents of such consensus, and anyone else who wants to talk about the future of Ireland

We Irish centrists would be well advised to move slowly. Unfortunately, there are two forces conspiring to make sure that we don’t learn this lesson. One of them is human nature. The other is a group of concerned citizens.

Earlier this month, a thousand nationalist bigwigs published an open letter in which they called upon the Taoiseach to launch a citizens’ assembly to discuss constitutional change on the island of Ireland. This self-selecting group – they call themselves Ireland’s Future – observes that the status quo is in flux.

According to their spokesman, Belfast solicitor Niall Murphy, Brexit and the “demographic inevitability” of change in Ireland (Catholic voters will soon outnumber Protestants) means that we must start preparing the ground for constitutional change on the island. Crucially, the letter-writers call for “maximum consensus on a way forward”.

These are nice words. But how will ardent unionists respond to them? How, indeed, is anyone outside the vanguard of urgent change supposed to react to a demand for a major initiative that all but guarantees a united Ireland in jig time?

Because that is surely what many of those bold futurists envisage. Anyone who thinks otherwise is either misinformed or wilfully ignorant.

Again, to be clear: I also want a united Ireland. It is the inevitable conclusion to a process that was unfortunate from the outset. But I do not want unification at breakneck pace, without huge support from the international community.

Nor can it happen in smug defiance of nearly a million people who think of themselves as British. That would lead to violence in a part of the world that has seen quite enough bloodshed; a place that is celebrated as an example of what can happen when people settle their differences in a slow, deliberative process that accommodates and supports the expression of divergent views. That includes the hostile and the indifferent.

In due course, Ireland could be unified without the loss of innocent lives and economic sovereignty. Maybe there is a set of constitutional arrangements that could lead us to those sunlit uplands.

The EU would have to cough up, perhaps in tandem with a broader international coalition, and parliament could rotate between Belfast and Dublin. Ireland might even rejoin the Commonwealth, as Eamon de Valera once offered to do in return for the North.

I do not have immediate access to a formula that will guarantee “maximum consensus”. So let us hear from the proponents of such consensus, and anyone else who wants to talk about the future of Ireland.

That includes fervid unionists, fanatical nationalists and the quiet centre of political opinion. But please, folks, let’s all go easy on the magical thinking.

Look what it did for the English.

Trevor White is director of the Little Museum of Dublin