Ryan Commission records must not seal Ireland’s dark past 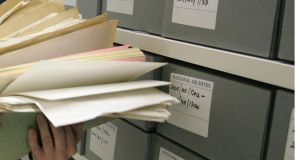 In attempting to seal the Ryan Commission documents for 75 years, this legislation validates shame for another three generations. Photograph: Alan Betson

The Oireachtas is considering legislation to seal the records of the Ryan Commission and the various institutional abuse redress boards for 75 years. The Retention of Records Bill – though arguably well-intentioned – would, if passed, be tantamount to the legally sanctioned silencing of victims of institutionalisation.

The gagging clause in the redress scheme – which bans those who receive redress from talking about their experience of the scheme or from divulging how much compensation they were awarded – is bad enough. This Bill would take it a step further. It would perpetuate the shame and stigma that survivors have already experienced before, during and after their time in the industrial schools.

The Dáil committee stage of the Bill has now been postponed in order for it to be scrutinised further by the Joint Oireachtas Education Committee. This Bill, first introduced in February last, is responding to a 2009 Dáil resolution that the records of the Ryan Commission and the various redress boards not be destroyed. It directs that they be retained and preserved for future generations by having them transferred to the National Archives and sealed for a period of not less than 75 years. The records are being sealed in order to preserve the spirit of the initial legislation that established Ryan, that the process of testifying be entirely confidential. Sealing for 75 years is thought to protect this confidentiality while ensuring access for future generations. This requires an amendment to the National Archives Act of 1986 which currently permits public access to government records after a 30-year period.

By telling their stories to the commission and the redress boards, women and men have been able to break the silence that surrounded their incarceration

The Bill suggests the Minister “shall have regard to the effects of the wellbeing and emotional state of persons’ should the material be disclosed in 75 years” time. But it takes no account of the emotional impact that closure of the records might elicit.

By telling their stories to the commission and the redress boards – since their inception in the mid-2000s – women and men have been able to break the silence that surrounded their incarceration. They have handed back the shame bestowed upon them as children by the prevailing religious and political culture of 20th-century Ireland.

This Bill if passed into law would reverse that process and be the apotheosis of social and cultural forgetting that has characterised attitudes to poverty and the State’s response to that poverty, as well as experiences of institutionalisation and abuse. It would underpin a century of silence within a legal framework. In attempting to seal the documents for 75 years, this legislation validates shame for another three generations.

While confidentiality was a feature of some of these processes, others gagged survivors and prevented them from speaking about their experiences. Individuals hold the rights to their stories and if they are willing to give their permission to have them made publicly available, this should be respected.

The year 2094 is the earliest possible date that the oral testimonies and the workings of the commission and redress boards can come to light, and then only under certain restrictive conditions.

The design and mechanics of these bodies are key to our understanding of how the state has dealt with historic abuse. The gagging clause has limited our understanding of the operation of the redress boards, but some have indicated that they could be adversarial and retraumatised many survivors. Should this information not come to light earlier than 2094?

The records identified in this Bill are hugely significant. The State’s holdings of various commissions of investigation and inquiry files will constitute the biggest single archive on institutional life in 20th-century Ireland. Not only that however, they also constitute a record of how the State in more recent times reckoned with that past.

The administrative records of the commission and the redress boards speak to a much more recent past, which has ramifications for how we deal with historic rights violations in the future.

Last month, Minister for Education Joe McHugh wrote in a newspaper article that, “We have an obligation to teach our young people about the dark side of our history: the mistreatment of women, including those confined in Magdalene Laundries; our State’s discrimination against those who did not fit in . . . and the shameful physical and sexual abuse of children and vulnerable adults and its cover-up.”

One of the expectations for Junior Cert students identified by the National Council for Curriculum and Assessment is that they can “debate the usefulness and limitations of different types of primary and secondary sources of historical evidence”.

If those are the parameters of a good historical education as outlined by the Department of Education, and if institutionalised abuse and mistreatment of vulnerable populations are key to uncovering our “dark past”, how can we reconcile the closure of primary source documents crucial to understanding that past?