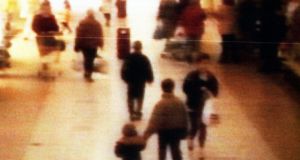 A surveillance camera shows the abduction of Jamie Bulger (2), in February 1993. Vincent Lambe’s short film Detainment, based on the abduction and its aftermath, has been nominated for an Academy Award. Photograph: BWP Media via Getty Images

In Vincent Lambe’s short film Detainment, Jon Venables, a 10-year-old boy, is about to be questioned in relation to the horrific murder of two-year-old James Bulger in the Liverpool suburb of Bootle in 1993.

“Do you know what truth is, Jon?” asks one of the detectives.

“You tell us what you think truth is.”

“That you’ve done something and it’s true.”

Venables and his friend Robert Thompson, also 10 years old, had indeed done something, something that haunts anyone who remembers it. That much is true, as indeed is this piece of dialogue, taken as it is from the transcript of the interview. But there is also a deeper and in some ways even more painful truth: Venables and Thompson were and are human.

More than 2,000 years ago, the Roman dramatist Terence, who as a former slave knew exactly what it is like to be dehumanised, wrote: “I am human and I consider that nothing human is alien to me.” It is easy enough to say but very hard to feel. Much that is human does feel alien – indeed, should and must feel alien. Humans can do such terrible things that we find ourselves wishing that there were another species altogether lurking alongside our own one. We reach for words that distance us biologically from this evil genus: beasts, animals, monsters. And we are both right and wrong to do this. It is a necessary but falsely comforting fiction and from time to time we have to be reminded that this fiction is not real, that the monsters are all too human.

Murder of a child

Detainment lasts for just 30 minutes and it has not yet been released but it is already the most controversial Irish film ever made. It deals with one of the most beastly moments in the recent history of these islands. The abduction, torture and murder of a child is terrible enough in itself. What made this abyss so much more profound is the idea of children killing a child. Venables and Thompson were the youngest people found guilty of murder in Britain in the 20th century.

Detainment has been nominated for an Oscar. When the nominations were released last month in advance of the awards on February 24th, James Bulger’s mother, Denise Fergus, tweeted: “I cannot express how disgusted and upset I am that this so-called film has been made and now nominated for an Oscar.” She has since demanded in TV interviews that the film should be withdrawn not merely from the Oscars but from all circulation: “Remove it from the public domain.”

At the time of writing almost 250,000 people have signed a petition on change.org calling for the Academy Award nomination to be withdrawn and for the Westminster parliament and Theresa May to put pressure on the academy to do so. Vincent Lambe has become a hate figure online and in parts of the British press.

Unlike the vast majority of those petitioners, I’ve seen Detainment. It is a superb piece of work, brilliantly constructed, astonishingly well acted and elegantly edited. It is a masterpiece of economic storytelling, an epic in half an hour. It is very easy to understand why, purely as an example of film-making, it is deemed to be Oscar-worthy. But that, of course, is not the point. Lambe is being subjected, not to film criticism, but to moral opprobrium. And it seems to me that this opprobrium is utterly misdirected.

The primary accusation against Lambe is that he did not consult Jamie Bulger’s parents about the film. It is of course entirely true that what happened to Jamie belongs to them in a unique and especially nightmarish way. No one can assume the right to possess their story. But the murder is a public as well as a private truth. Denise Fergus has herself written a book about it, I Let Him Go: The heartbreaking book from the mother of James Bulger. So has his father, Ralph Bulger, whose My James details the very same interrogations that are the basis for Detainment. It might be argued that no one else but the parents has any right to use this material but that ship sailed a long time ago – the very tabloids that are demonising Lambe have never ceased to gorge themselves on the case.

The real disturbance of Detainment is that once you put Venables and Thompson on screen, played by kids around the same age they were when they murdered Jamie, you do something genuinely terrifying: you humanise them. The film is not sympathetic towards them. It does not excuse them. It does not sentimentalise them. It merely shows them: two children, one frightened and weepy, one defiant and cold. But it shows them in the flesh precisely as children – not beasts but little humans.

And we are forced to ask: is this humanity alien to me? I wish it were and I completely understand why anyone would want to say that these creatures are not us. But we know the truth that humans get damaged early and that damaged humans are dangerous humans. Lambe’s film is restrained, serious and to me profoundly moral. He has done something and it’s true.