Why does today’s vote in the House of Commons feel so anticlimactic? Because it is based on a fantasy of how history works

British PM Theresa May says that she believes that the current Brexit agreement is the "best deal possible" as MPs prepare to vote on it. Video: Reuters 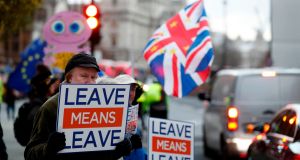 What the ardent Leavers say about a no-deal Brexit is not that they are really convinced it is a good thing, but that the English will endure the suffering and get through it because that is what they have always done. Photograph: Adrian Dennis/AFP/Getty Images

Today is supposed to be historic, one of the most epic moments in the long life of the Westminster parliament. So why does it not feel like that? The tabling by a British prime minister of an agreement on the terms of withdrawal from the European Union ought to feel much bigger than this. Some of the reasons are obvious enough: the sheer tedium of the journey; the tragicomic chaos that undermines the desired solemnity; the lack of any great drama attaching to the immediate outcome of the vote; the knowledge that this decisive moment will in reality decide nothing.

But there is a deeper contradiction at work: Brexit seeks to make history by unmaking history. Like all revolutions, it imagines a Year Zero, a point at which time’s great clocks are set to the beginning and all unwanted histories are erased. In the imagination of its leaders and supporters, history both ended and began on June 23rd, 2016: a history of humiliation and submission was over and done with, and a new history of self-assertion and liberation began.

We have to remember what today was supposed to be like, what those who have brought their country to this pass had in their heads three years ago. After what Nigel Farage hailed as Independence Day when the referendum results came in, today should have been the formal declaration of independence by parliament. Presumably, when they pictured the scene, what they saw was an overwhelmingly united House of Commons, its members – apart from a few snarling Scots, malcontents and traitors – on their feet, tears streaming down their faces, singing Rule Britannia in lusty chorus. That’s what making history is supposed to be like.

There are two problems, however. One is that, as with everything else, Brexit is self-contradictory in its idea of history. On the one side it proposes a revolutionary break with the past. On the other, the word that conjured it into being was “back”, as in Take Back Control. It is full, not just of nostalgia, but of pseudo-history. It is an old curiosity shop of fake antiques: the Dunkirk spirit, the Blitz spirit, Agincourt, Henry VIII, Winston Churchill, the Spanish Armada . . . When you listen to the ardent Leavers, what they say about a no-deal Brexit is not that they are really convinced it is a good thing but that the English will endure the suffering and get through it because that is what they have always done.

Fifty years ago, in A Poem in Praise of the British, the Scottish poet Douglas Dunn chillingly – and presciently – captured the strange afterlife of all this zombie history: “The archivist wears a sword and clipped moustache./ He files our memories, more precious than light,/ To be of easy access to politicians of the Right,/ Who now are sleeping, like undertakers on black cushions,/ Thinking of inflammatory speeches and the adoring mob . . .”

The other problem is of course that history can never be ditched. It can, perhaps, be transcended, which is what we on this island have been trying to do. But it cannot be erased. In the imagination of the Brexiteers, the great English balloon will ascend when the ropes connecting it to the ground of history are untied and the complications of the recent past are jettisoned like sandbags. Up, up and away! – floating above the entire past 46 years of being merely a normal European country, into the blue skies of an exceptional destiny.

One of those commitments is the Belfast Agreement. To adopt a term from medical insurance, Northern Ireland is a pre-existing condition of the British state. It is just as much British history as Agincourt and Dunkirk are – and, right now, much more so. And it exerts a gravitational pull that cannot be escaped. Karl Marx said that we make our own history but we do not do so in circumstances of our own choosing. The basic problem of Brexit is that it embraces the first part of this dictum while ignoring the second. The circumstances in which the history of these islands is being made include both 45 years of common membership of Europe and 30 years of the Troubles. Those years cannot be wished away.

And so climax sags into anti-climax. With one bound our hero is not free: if you try to leap when one foot is snagged on the briars of pre-existing conditions, you fall on your face. And afterwards? Where can Britain go but “back”: back to its actual here-and-now of complexities, compromises and ambiguities not so different to anyone else’s. There is still much history to be made, for Britain, Ireland and Europe. But it cannot begin with fantasies.

1 We need to pay very close attention to what is happening in Britain now
2 Irish tourists excluded from visiting Greece as country begins its tourism season
3 Remaking Ireland: Five positives from the pandemic
4 Police officer ‘kicked in the face’ while clearing crowd from beach
5 Quarantine will cease within fortnight, Ryanair CEO claims
Real news has value SUBSCRIBE