The Irish Times view on higher education: a system at risk 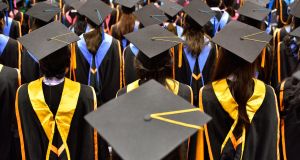 Research indicates Ireland is one of only two European countries where the third-level education system is ‘in danger’. Photograph: iStock

Our higher education system is vital to creating jobs, raising living standards and supporting our citizens to reach their full potential. However, the impact of almost a decade of spending cuts, rising student numbers and a cap on hiring permanent academic staff has taken its toll. Research by the European University Association published this week indicates that Ireland, alongside Serbia, are the only two European countries where the third-level system is “in danger” due to funding shortfalls and climbing enrolment.

Third-level funding in Ireland as a share of gross domestic product halved from 2012 to 2017, the research found. In addition, Ireland was ranked as the second-worst country in the EU – ahead only of Croatia – for restrictions on staff recruitment. None of this will come as a surprise to policy-makers. It is three years since a report by an expert group chaired by Peter Cassells on the future funding of higher education was published. It warned urgent changes were needed to ensure our system was “fit for purpose”. It recommended three options - a publicly-funded system; income-contingent student loans; or a multi-annual programme of increased investment. To date, no decision has been made.

Agreeing a funding model for higher education will not be easy, but the Government cannot delay it forever

The Government has at least reversed the cycle of declining State investment in the sector in recent times. Increases in a payroll levy on employers, together with modest extra public spending, are resulting in some additional funding for higher education and training. This is a sticking plaster solution which masks the bigger issue. It falls hundreds of millions of euro short of the sustained investment needed to build a world-class system. In the meantime, Irish universities are slipping down global rankings and being left in the slipstream of their Asian counterparts.

Agreeing a funding model for higher education will not be easy, but the Government cannot delay it forever. It needs to grasp the nettle soon to have any hope of fulfilling its aim of having the best education and training service in Europe by 2026. The status quo, simply put, is not sustainable.

1 Coronavirus: Government to extend restrictions for at least two weeks
2 Chief medical officer urges people not to visit hardware stores
3 Coronavirus: Ireland will have to ‘live alongside the virus’
4 Coronavirus: Ryanair suspends refunds and offers passengers vouchers instead
5 Impact of coronavirus ‘overwhelming’ in Republic but for public-health controls
Real news has value SUBSCRIBE