Fintan O’Toole: It is not just the economy, stupid – Brexit is about belonging

Brexit will not be reversed on the basis of economic arguments alone. The Left must address the crisis of identity at its heart

Knottingley in north Yorkshire was once a busy mining town, but since the closure of Britain's last deep coal mine in 2015 locals feel the area has been "forgotten" and hope Brexit may lead to a regeneration. Video: Reuters 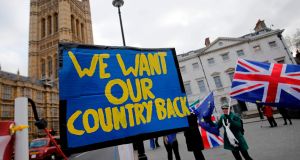 Pro-Brexit protesters outside the Houses of Parliament: hard Brexiteers, under the cover of nationalism, want to unleash an even more virulent form of globalisation that will destroy what is left of working-class communities. Photograph: Tolga Akmen/AFP/Getty Images

Before Christmas I was talking to a middle-aged man in Magharafelt, Co Derry. He was from a Catholic background and was active locally in the SDLP. Inevitably, the talk turned to Brexit and the economic harm it would do. But he pointed out that in the 1970s, the Republic was an economic “basket case” while standards of living were much better north of the Border, even for people like him.

“And yet,” he said, “if someone had given me the chance to vote for a United Ireland, I’d have done it in a heartbeat. I’d have taken the hit. So I understand where people are coming from in England. It’s not all about the economy, you know.”

He was right, of course, and there is no chance of escaping from the current crisis for these islands until we all recognise that economics arguments will not change many minds.

In the 1990s every wannabe politician or spin doctor in the settled democracies watched the brilliant fly-on-the-wall documentary on Bill Clinton’s campaign in 1992, The War Room. In it, the campaign manager James Carville sticks a sign on the wall, intended to focus the minds of the staff: “It’s the economy, stupid!” It became, of course, conventional wisdom. In his gripping book on the Brexit campaign, Unleashing Demons, David Cameron’s chief strategist Craig Oliver writes that “Our campaign was based on the simple proposition that electorates don’t vote against their own pockets. That view is summed up best in the closest thing to an iron law in politics, James Carville’s realisation when running the first Clinton presidential election campaign, ‘It’s the economy, stupid!’”

The big problem is with the “stupid” bit. It is, of course, never not the economy: people’s economic conditions and expectations will always shape their lives and those lives will always shape their political attitudes. But it is not “stupid” to vote for other reasons too. Some people are indeed ignorant or deluded or misled about the economic consequences of their votes. And some people know very well that they are risking their own economic wellbeing but feel it is a price worth paying anyway.

Ireland is a perfect case in point. For about the first 70 years of Irish independence, the decision to leave the United Kingdom was – on a cold calculation – a mistake. Most ordinary Irish people were worse off than their UK counterparts – that’s why so many of them emigrated to Britain. And yet very few of them would have voted to go back into the UK. We should remember this when we look across the water and wonder at the obvious willingness of so many people in England to trade economic self-harm for an idea (however misplaced) of national independence.

One of the fatal flaws of progressive centre-left politics as it developed under Clinton and Tony Blair was its contradictory attitude to all of this. On the one hand, the centre-left knew very well that it was not all about the economy – it embraced the importance of race, gender and sexual orientation. On the other, it came to believe that identity politics stopped where economics began. As the old working class was dismantled and the power of labour unions diminished, it was convenient to forget that economics and identity are and always have been deeply intertwined.

So it was easy to understand that a sense of belonging might be more important than money to minorities, but less and less understood that the same might be true for white working-class communities. Black pride or gay pride were good things, but the old forms of working-class pride – being in a union, for example – were outmoded and the people who clung to them would just have to get over themselves.

Brexit – like the election of Donald Trump and the rise of far-right identity politics in Europe – is a consequence of this contradiction. The anti-Brexit campaign rigidly obeyed the “iron law” that, in the end, people do not vote against their pockets. And most of the arguments against Brexit still come down to dire warnings about jobs and living standards. Those arguments are necessary but they are not sufficient.

There is a long-term crisis of belonging in the UK. Brexit is its most lurid symptom, but it is not a cure. Theresa May’s appeal to the “precious, precious union” is mere denial about the rise of English identity. The hard Brexiteers, under the cover of nationalism, want to unleash an even more virulent form of globalisation that will destroy what is left of working-class communities.

And yet these liars and fantasists have been allowed to own the most potent political emotions – collective pride, identity, belonging. The willingness to sacrifice economic comfort for a sense of the greater good or a higher ideal is not innately self-destructive. Nothing noble or decent is ever accomplished without it. The Right has turned it into a sharp blade and told people to cut themselves with it. Those people think they are making a sacrifice when they are merely being sacrificed. The Left has to speak, not just to their rational desire not to make themselves poorer, but to the bigger reasons why they don’t think it’s all about money.