I’m a contented atheist. My conscience is my only god 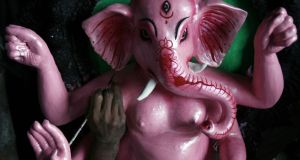 A quick Hail Mary at home if I was about to get a tongue-lashing from my mother or a silent prayer to Ganesha before a maths test in school – it was a no-brainer. Photograph: Rupak De Chowdhuri

I was born in India into a reasonably devout Hindu family and therefore, very unsurprisingly for then, received a traditional Catholic schooling.

Educated by nuns, Irish in the main, I was one of many millions of children who were part of that strange trade-off between middle-class Indians of various faiths and the Catholic Church.

To be “convent-educated” meant you had received more than just a schooling – you learned to be an adaptable creature, capable of absorbing disparate, sometimes conflicting, ideologies, compartmentalising or marrying them as needed between school and home.

A quick Hail Mary at home if I was about to get a tongue-lashing from my mother or a silent prayer to Ganesha before a maths test in school – it was a no-brainer.

Of course, I was a child then and a god was a god – a crown of thorns around a bleeding heart was no more unusual than a 10-armed goddess: I never questioned either religion.

That was until my brother died and my world turned upside down. I was just 22 years old and my blind faith wavered. But only wavered. I was too afraid to toss aside religion in one go.

As much as I felt that my brother’s death proved there was no God, my fear of rejecting all belief stemmed from a convoluted logic: if something bad happens to you once, of course it can happen to you again.

To put it bluntly, I felt I needed to hedge my bets. So, when I arrived in Ireland a year and a half later, I was in limbo. It was hard to wrestle with religious doubts, Hindu or otherwise, in the Sligo of 1987.

Add to that, I was newly married to the love of my life and he had a never-ending list of difficult exams to pass, so I lapsed. Back into religion that is. I was back praying and wasn’t averse to petitioning the occasional Catholic saint.

Still, faith was fairly low-key until the children arrived. Then began a decade of bribery, cajoling and bargaining with deities big and small.

My trade-off with the gods was frenzied: candles and lamps were lit, money pushed into offering boxes, donations given to temples and churches, pilgrimages made up mountains and through forests.

I fasted on Tuesdays, I was vegetarian on Saturdays. I had my mother in India replicating me, covering all options in terms of temples and shrines there, while I did what I could from my home in Kildare. By God, I was going to make sure my children were going to be healthy and happy.

The realisation that I had bought into this ridiculous quid pro quo came gradually. Yes, there were catalysts: religious bigotry had begun tearing India apart, while Ireland, the place I call home, was emerging from a tyranny of biblical proportions.

I wanted to free myself of the bind of religion, step outside the silent and safe middle ground and relentlessly question everything that was being done in my name. There was also my teenage son who never tired of questioning all religious belief, constantly throwing logic and reason in my face.

However, my road to Damascus moment came on a trek to Everest base camp. In a remote and ancient Buddhist monastery, one of the highest in the world, novice monks sat cross-legged on the floor wearing saffron cotton robes.

Next up were the senior monks on a wooden platform in crimson silk and well above them, high on a silver dais, regal in maroon velvet, sat the head abbot.

Get me out of here, I thought to myself. Even in this religion, beloved by people who reject all other beliefs, it’s all just about men in hierarchical costumes!

It’s a couple of years now and I’m a contented atheist because my conscience is my only god. Religion used to provide me with succour but nowadays I find reliable and greater succour in confronting my failings, each time only to realise that my destiny is truly in my own hands.