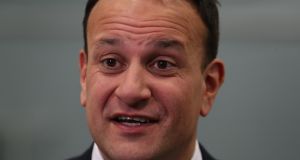 Leo Varadkar: In the Virgin TV debate he decided to wrong-foot Micheál Martin by making him an unexpected offer of Fine Gael support for a Fianna Fáil-led government. Photograph: Liam McBurney/PA

The exit poll conducted on election day established a few things. Apart from showing the three largest parties neck-and-neck, it also established that among all voters the coalition scenario that was clearly least popular (and presumably least intended by voters) was a government including Sinn Féin.

In these circumstances, it is nonsense to argue that there is something undemocratic about the next government being formed by parties other than Sinn Féin. There is no true parliamentary democracy in the free world that entitles 24 per cent of the electorate to insist that their party must participate in government.

By the same token, neither Fine Gael nor Fianna Fáil can credibly contend that the electorate was happy with the confidence-and-supply arrangement that held sway since 2016. Both parties lost ground on their 2016 vote and both parties lost seats accordingly.

In the Virgin TV debate chaired by Pat Kenny, Leo Varadkar decided to wrong-foot Micheál Martin by making him an unexpected offer of Fine Gael support for a Fianna Fáil-led government. This ploy was remarked on by commentators as a shrewd debating tactic.

Fine Gael was carefully and cynically using a pincer movement – on one hand shouting loudly that we could not trust Fianna Fáil not to go into coalition with Sinn Féin and on the other hinting that a Fianna Fáil-led government would be just more of the “same old, same old” arrangement with Fine Gael.

I have no doubt that the small group of Fine Gael HQ strategists rubbed their hands in anticipation of the difficulty such an offer of Fine Gael help would create live on air for an unsuspecting Martin.

And it may well have worked. It may well have damaged Martin’s credibility in pursuing an FF/Green/Labour coalition which was the frontrunner before the Sinn Féin surge became apparent.

The problem for Fine Gael is that Varadkar deliberately made that offer and cannot credibly withdraw it now. The claim once infamously made by a Labour minister that “these are kind of things that you say in elections” is indefensible, cynical and amoral.

I cannot recall any Fine Gael dissidents disowning Varadkar ’s clever piece of gamesmanship the morning after the debate. The party was delighted with his ploy.

Now he is hoist on his own petard. He deliberately sought votes by making a solemn offer of support to Martin. That moment was too important to airbrush out of history now. It cannot be shrugged off as irrelevant to the new political arithmetic.

It was offered on the hypothesis that Martin might need that support to form a government; it was done to sway voters who feared a Sinn Féin presence in government. It was calculated in every sense.

Equally cynical is present talk of Fine Gael retiring into opposition in a spirit of humility. They sought a mandate to govern on the express basis that they would, if necessary, do so with Fianna Fáil.

Unless they believe that the country would be better governed by a Fianna Fáil-Sinn Féin-led coalition for the next five years, their democratic and moral obligation is to deliver on their public offer of support.

Yes, we need change – a radical change of course in a number of policy areas. As Mark FitzGerald wrote in these columns this week, there can be radical change. Homebuilding and urban planning needs a major public input now. Reliance on market forces in those areas alone will not deliver for the public good. It never has. It will only deliver an entire generation condemned to pay inflated rents to investment funds.

There is no reason why Fianna Fáil and Fine Gael cannot – with a little more patriotism, a good deal less cynicism, and, yes, some humility – devise a five-year programme for change. If the Greens will sacrifice their re-established political virginity to participate, so much the better. If not, there are sufficient like-minded Independents who would negotiate support for such a programme.

If Fine Gael cannot swallow such an outcome, do they wish to offer confidence-and-supply to anyone else from the opposition benches?

Is there something so unique about Fine Gael and their policies that they can justify abstaining from any participation with anyone in government? Do they seriously assert that the result of the election was a form of democratic banishment from office?

From my long experience of dealing with both Fianna Fáil and Fine Gael, I can confidently state that they are more than capable of devising a five-year programme for change and governing together.

Am I worried that Sinn Féin will be the major opposition party for the next five years and in pole position to get into government in five years?

We have just had an election to decide who governs us for the next five years and how – not to attempt to decide who will be leaving office in 10 years’ time.

The public interest should trump party interest. The Tory party offered a referendum they didn’t believe in to secure party unity. Brexit was the result.

If Fine Gael actually wants Sinn Féin in government for party reasons, let them say so. If not, let them act accordingly.

1 Coronavirus: 25 more people die in the State as new Garda powers come into force
2 Coronavirus: More ‘striking’ evidence BCG vaccine might protect against Covid-19
3 Coronavirus Q&A: What new powers have the gardaí been given?
4 Sligo woman jailed for 28 days over coughing in garda’s face
5 Lockdown exit: How can Irish economy reopen without big health risks?
Real news has value SUBSCRIBE