Fashion industry must confront its role in climate damage

Extinction Rebellion is set to protest at London Fashion Week. Here is what must change 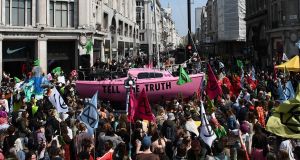 Extinction Rebellion in Oxford Street and Regent Street in London in April. The group is poised to scare the fashion industry into action. Photograph: Daniel Leal-Olivas/AFP

London Fashion Week will commence as usual on Friday. Meanwhile our world is on fire.

Most of us agree that lucrative events based on consumption of material goods should not be the priority during the current existential climate crisis. One could go a step further and say London Fashion Week is a kind of madness entrenched in denial with profoundly lethal consequences.

Its appealing to think that fashion week is a chance for designers to do their bit to save our planet and challenge the system.

But leaving this task to the fashion giants is the equivalent to staying on the Titanic and looking at the iceberg looming ahead. We need to decentralise fashion, abandon ship to smaller boats and start again.

We know what is going on with the climate crisis and the part played by the fashion industry and “fast fashion” in particular. The industry is more polluting than the aviation and shipping industries combined.

When confronted with this reality, the London shows no longer hold the joy or escapism they once did. Instead they perpetuate cognitive dissonance; glittering runways with voiceless models are no longer in tune with what we need to do to survive.

Climate activists Extinction Rebellion are planning a high-profile campaign to boycott London fashion week. As someone who took part in fashion weeks for a decade of my life I am all for it – at least the threat of it – to scare the industry into action.

Extinction Rebellion’s actions will not harm creativity, or new fashion brands carving sincere ethical and sustainable paths for themselves , or the intangible things that make fashion special.

If anything the best parts of fashion will be enhanced in the storm.

Weighed down by its own baggage, the industry doesn’t inspire the new generation coming into the fray emboldened with clever, colourful and urgent banners and a snowballing awareness and anxiety surrounding the climate disaster.

For them true style is far more nuanced then getting a dress identical to a million others on a sales rack, that costs next to nothing, but took thousands of litres of water to make, exploited the person who made it (garment workers are the second-highest-at-risk group for slave labour with 85 per cent being women) and that only really gives a momentary hit followed by emptiness.

Fast fashion is an addiction. Millions of euro are spent in order to bombard people with imagery on our phones, on billboards, on magazines. Of course its difficult for us to see through this carefully designed deep, desirable fog.

Sometimes it feels easiest to compare fast fashion to other addictions to understand it and our part as consumers clearly.

When it comes to the tobacco industry who do you hold responsible for the problem – the smoker or the tobacco company? The smoker needs to take responsibility, yes, but ultimately you wish that the billion-dollar businesses behind making smoking desirable would stop manipulating the masses to continue additive and incredibly harmful behaviour. The same rules apply to the fashion industry.

London Fashion Week feels like a Trojan horse, with its facade crumbling to reveal its menacing interior

With a climate catastrophe on the horizon, London Fashion Week feels like a Trojan horse, with its facade crumbling before our eyes to reveal its menacing interior.

Thankfully there are female-led initiatives blossoming fast around the country such as Sustainable Fashion Dublin and Swapsies who host swaps, informative panels and upcycling workshops. There are Ireland’s queens of the peer-to-peer social shopping app Depop: Molly Parsons and Tara Stewart.

There is my own circular economy start-up, 100% ReLoved, which brands secondhand clothes with its heart symbol, or the pioneering Nu Wardrobe App where you can share clothes with people in your area. Other include The Fashion Revolution and Jump the Hedges.

Initiatives like these are excellent on so many levels because they cause no further harm to the planet, they do not endorse slave labour and they are nourishing and educational to us instead of addictive.

When fashion is used like this and harnessed by clean, circular systems it can be an incredibly creative, galvanising force, communicating our position with no words needed. Fashion can once again be a connective arrow to spread hope.

Laragh McCann is a former model, writer and founder of 100% ReLoved