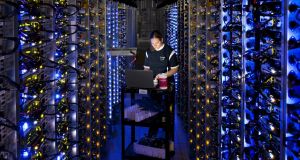 Interior of a Google data centre. Eirgrid reports that by 2027, electricity demand from data centres will have risen to 31 per cent of total demand. File photograph: Google

Work on the first phase of a €1 billion Amazon data centre facility is about to begin in Mulhuddart, Dublin, as reported at the weekend. If Amazon’s full plans for the 26-hectare site are realised, the development will consume an estimated 4.4 per cent of Ireland’s total energy demand by 2026. It will provide as few as 30 permanent jobs.

Data and technology are usually perceived as positive for the environment – think smart meters, driverless cars or smart home heating systems. And while companies such as Amazon and Apple jostle for the title of “greenest” tech company, the reality is that their business models rely on global supply chains that involve fossil fuels, rare earth mining, industrial manufacturing and e-waste. Data centres are thus just one – albeit large –part of this tech footprint.

The lack of environmental scrutiny of data centres is no accident. The “cloud” has been promoted as somehow clean and immaterial, a global storage unit that is a part of the atmosphere. The metaphor itself – popularised by Amazon in the mid-2000s – is meant to indicate this very immateriality; “hands-off” computing meant as a solution to bulky enterprise and consumer hardware.

In Ireland, this image is fuelled by a media fiction that locates the tech economy in the Silicon Docks. However, these flashy offices are in fact reliant on wide geography of places, infrastructures and resources that are rarely discussed in the media.

Eirgrid reports that by 2027, electricity demand from data centres will have risen to 31 per cent of total demand. Greater Dublin’s electricity demand could double in 10 years, mainly due to the number of data centres planned by multinationals for the region. This means that over the next decade, demand for power in the capital will grow by the same amount as it did over the last 100 years. Where will this energy come from?

Tech companies claim that they source 100 per cent renewable energy for data centre operations. But short of going off-grid and generating their own energy, such claims don’t amount to much. Despite recent investments in wind energy, data centres here still rely on Ireland’s national energy grid, which continues to be predominantly powered by fossil fuels.

These companies are more concerned with securing large supplies of energy than with low-carbon transition. The liquefied natural gas (LNG) terminal project in the Shannon Estuary, proposed by US company New Fortress Energy, is designed to import and process shale gas extracted through fracking in the US. Chief executive Wesley Edens has been in direct talks with major tech companies based in Ireland, making it clear that the energy demands of data centres is a determining factor in driving the controversial project.

The Irish State has attracted largely tech investment through taxation and planning policies. However, we also need to pay more attention to the legislative, planning and infrastructural conditions put in place by the State for these companies.

Proposed in 2017, Amazon’s Mulhuddart project faced environmental appeals by the same objectors to Apple’s planned Athenry data centre in 2015, who received a final ruling in the Supreme Court last April. While Apple had already withdrawn the project, the decision ruled that Apple was not required to submit an environmental impact assessment for the entire planned campus.

Amazon benefited from this ruling. Along with the amendment to the Planning and Development Act of 2000 which designated data centres as “critical infrastructure” allowing them to skip local planning, the State has gone all in to support these companies at the expense of environmental considerations.

The current Government should take a long look at the information available: the data centre gamble is far from sustainable

The State also provides more than legislation and planning support. Data centres clustered on the east coast rely on the State’s physical energy grids. With some data centres requiring the same amount of energy as Drogheda, Eirgrid has stated its planning strategy is now “heavily influenced” by the expected growth of data centres. The expansion and development of Ireland’s public transmission network is being shaped by the intensive energy demands of data centres.

The Government’s Climate Action Plan takes the increasing energy needs of the tech industry as a given. At the same time, each household in the country will soon be equipped with a smart energy meter to help reduce energy consumption. There is something grossly inequitable about individuals being forced to take on more responsibility for climate change while certain global industries are allowed to escalate their consumption of energy resources.

As is clear, data centres have impacts that may not have been predicted by early planners and pro-tech policymakers. The governments involved may not have even realised the implications, or the extent to which data centres would be required to power the global tech economy.

With green energy and emissions targets at risk of being missed entirely, the current Government should take a long look at the information available: the data centre gamble is far from sustainable, and the tech industry should not be the determining factor shaping our collective energy future.

Dr Patrick Bresnihan is lecturer in the Department of Geography at Trinity College Dublin, and Patrick Brodie is a doctoral student at Concordia University in Montreal

1 Drug dealer loses codes for €53.6m bitcoin accounts
2 Ben Affleck: ‘It took me a long time to admit I am an alcoholic’
3 Anti-Irish bigotry in Britain has not gone away
4 Would you kill one person to save five? Depends if you’re a millennial or not
5 L’Arche founder implicated in sexual abuse of women
Real news has value SUBSCRIBE