European Parliament made the right move on tax reporting

New reporting rules for multinationals are an important step forward 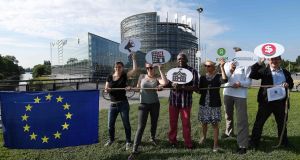 Oxfam activists hold placards during a demonstration against tax evasion in front of the European Parliament ahead of Tuesday’s vote. Photograph: AFP

So what do Sinn Féin and the far right have in common? Quite a lot by their voting patterns in the European Parliament.

On Tuesday Sinn Féin MEPs sided with the likes of Marine Le Pen’s Front National party and other far right groups in the European Parliament by refusing to back progressive tax transparency measures. These measures will force multinational companies to publicly disclose information on how much tax they pay on a country by country basis. This proposal is the first of its kind for the majority of European multinationals that fall within its scope. Europe is moving in the right direction on tax transparency.

In the immediate aftermath of the vote, international tax NGOs welcomed the Parliament’s proposed measures. The Tax Justice Network called them a “significant step forward”.

Practically everyone involved in today’s vote has issues with some part of the text - that included MEPs, NGOs, Member States and the European Commission. But most agreed that it is best to support the final vote instead of waging an unnecessary protest war. Most except Sinn Féin and their political bedfellows on the far right that is.

And another question for Sinn Féin is why did they vote against the proposals when they were put to the Economic and Monetary Affairs Committee on June 12th? How can Sinn Féin one minute be in favour of tax transparency but then refuse to back progressive proposals when put to a vote? Were they put under pressure from their corporate backers in the US?

The measures agreed by the Parliament represent a major step forward for tax transparency. Europe is leading on this issue alone. Country-by-country reporting is coming whether multinationals like it or not and I believe tax information for large companies should be made public as long as it is fair and is in the public interest.

What was important in the final outcome of Parliament’s position is that there is a clause which ensures that companies can get an exemption from publishing commercially sensitive information. These exemptions need to be approved by the national regulator before being scrutinised by the European Commission for approval and are finally disclosed on a list by the Commission. There will also be a review of this clause after four years. Despite what Sinn Féin contend, there are enough checks and balances from the European Commission and from national regulators to ensure that this clause is not a loophole.

In fact, the Parliament’s report goes a lot further than the original Commission position. The Commission wanted to ensure that a company’s non-EU activities would only be reported on an aggregated basis. Instead Parliament has proposed that a company shall publish tax information on a complete country by country basis regardless of whether the activities are EU or non-EU related.

There has to be a balance between public disclosure and commercial sensitivity. We cannot create rules that makes business impossible to function in Europe. We want to ensure that we keep the likes of Facebook, Google and Apple in the EU. Most of these companies have a big presence in Ireland, pay more than 80 per cent of the totality of corporate tax collected, employ over 200,000 people - they are part of Ireland’s success story. It is a good thing that they have invested in our country and see the benefit of what we have to offer.

Fine Gael is in favour of corporate tax transparency. Under this and the last Fine Gael government, Ireland signed up to the OECD BEPS process, the only internationally binding rules aimed at preventing tax fraud and tax evasion. The government was one of the first in the EU to introduce automatic exchange of tax rules, the second country in the world to sign up to the Foreign Account Tax Compliance Act (FATCA) agreement and one of the first countries in the world in 2015 to implement OECD guidelines on country by country reporting.

Instead of turning every important international issue into an attack for political purposes on the Irish government, Sinn Féin MEPs in the European Parliament really need to take these issues more seriously. Consistency of rational argument when it comes to moving the international tax agenda on is not just the preserve of governments.

5 I spent a year testing eye creams: here is what works