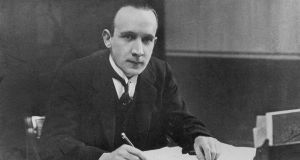 Kevin O’Higgins: gunned down by IRA assassins on July 10th, 1927

In the summer of 1922, independent Ireland slipped into a state of civil war. As the government struggled to suppress a republican uprising with bolshevist undertones, elements within the Cumann na nGaedheal party (forerunner to Fine Gael) looked to augment the National Army and the infant Garda Síochána with armed treatyite paramilitaries.

Inspiration for such a force came from Italy, where Mussolini’s fascists stood on the cusp of power, and Germany, where the Freikorps, a reactionary movement of demobilised soldiers that presaged the Nazis, had crushed putative communist revolutions.

At cabinet level, two ministers stood out as reluctant democrats. For his part, Ernest Blythe believed that there was “too much of the mob about the Irish people”. Then rotating between the ministries of trade and economic affairs, Blythe eventually inherited the finance portfolio, which he held until 1932. The minister for posts and telegraphs, JJ Walsh, shared Blythe’s thinking. A successful businessman outside of politics, Walsh admired Mussolini, and afterwards Hitler also, going so far as to finance a pro-Axis Irish underground during the second World War. In the Civil War era, he believed that the anti-Treaty IRA could only be crushed by an “Irish fascisti”.

Conversely, the acknowledged strong men of the Irish Executive, Michael Collins and Kevin O’Higgins, opposed state paramilitaries. Before his death in August 1922, Collins harboured hopes of a rapprochement with the irregulars, while he also sensed dangerous parallels with controversial republican policing experiments during the War of Independence, not to mention the infamous Black and Tans employed by the British state.

In the post-Collins era, O’Higgins bluntly informed the cabinet that there would be “no fascisti”.

While he had no sentimental ties to the IRA, he shared Collins’s reasoning about auxiliary policing on European lines. O’Higgins also expressed confidence in the Garda Síochána, an agency for which he, as minister for justice, was directly responsible. Founded prior to the Civil War, the Garda had managed to remain aloof from the conflict, and O’Higgins feared that an overtly political gendarmerie would undermine public support for the regular police.

Republicans despised O’Higgins nonetheless. As the responsible minister, he confirmed the sentences of execution passed on 77 irregular prisoners during the Civil War.

In 1923, the IRA exacted revenge by murdering O’Higgins’s father and burning the family homestead in Stradbally, Co Laois. Four years later, on July 10th, 1927, O’Higgins was also gunned down by IRA assassins, who ambushed the minister as he strolled to Mass in Booterstown, minus the Garda security detail that he consistently declined.

The killing of Kevin O’Higgins prompted a hardening of attitudes against republicans, including those who gravitated to Fianna Fáil. Established in 1926, Fianna Fáil proclaimed constitutionalism without condemning the IRA. Fearful of the new party, Blythe resurrected the prospect of a treatyite militia in 1929 when, as acting defence minister, he promulgated the so-called Volunteer Reserve. Occasionally referred to as the National Guard – a title subsequently employed by the Blueshirts – this force was to number 50,000 men gleaned from the universities, civil service, and farming interests.

Recruiters also paid token visits to trade union officials. Labour leaders, however, believed that the militia would be turned against striking workers, for 1929 witnessed the worst industrial unrest in Ireland since the 1913 Lockout. As such, the left followed Fianna Fáil in denouncing the Volunteer Reserve as a covert attempt to introduce fascism to Ireland.

These denunciations led to the early shelving of a highly controversial experiment. Nevertheless, the thinking behind the Volunteer Reserve became apparent in the early 1930s, when ex-minister Blythe aligned himself to the extremist wing of the burlesque Blueshirts. In critiquing the failings of parliamentary democracy, he outlined plans to create a 50,000-strong political militia that he christened the Diastal Association. Conceived by Blythe as a state within the state, this notional force was to be drawn from the “better elements” in Irish society, and would regulate government, the judiciary, and labour relations along nakedly fascist lines. Viewed in this context, the concerns raised about the Volunteer Reserve in 1929 were not without foundation.

Thankfully for Irish democracy, Blythe’s ideology did not prevail.

Instead, he was marginalised by Fine Gael when the party ditched the Blueshirts in 1934, and re-engaged with the conventional politics previously espoused by Kevin O’Higgins and like-minded pro-treaty constitutionalists.

3 Is paying someone to clean your house the last word in middle-class privilege?