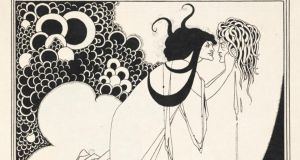 In the Roman calendar, June 24th was the feast of Fors Fortuna, the goddess of fortune. Her cult survives today in the form of Lady Luck, and modern worshippers have included Frank Sinatra who, in a famous prayer, used to invoke her assistance in the casino of life.

Mind you, as the ancient Romans knew, she conferred both kinds of luck, good and bad, and did so without favour.

Sinatra seemed to be finding this out the hard way: “It isn’t fair, it isn’t nice,” he sang; “A lady doesn’t wonder all over the room/And blow on some other guy’s dice.”

Fortuna is not to be confused with Lady Justice, although confused they sometimes are.

They were both supposed to work blindly, after all, and so often appear blindfolded in statues.

So maybe the controversial figure on the gate of Dublin Castle is a mixture of both.

Erected in 1750, she was supposed to represent justice: hence the scales and sword.

But she has no blindfold and, notoriously, has her back turned to the city, suggesting the dice were loaded.  An anonymous Dublin wit summed it up in verse: “There she stands upon her station/Face to the castle, arse to the nation”.

Getting back to the Roman Fortuna, however, there was more to her portfolio than mere luck. She was also the driving force that made men and women (and the males and females of all species) procreate. As such, she was invoked by would-be mothers and gardeners alike.

Her role in this area also appears to have involved dice-loading. In one of her manifestations, Fortuna Virilis, she made women irresistible to men. But she may have encouraged them to direct action too. Her feast-day in Rome is thought to have allowed women licence to enter men’s public baths.

Then the Christians came along and changed all that. In attempting to supplant the various pagan festivals in the calendar, the new church did what GAA teams used to do, and adopted a man-marking system, or woman-marking in this case.

Just as the feast of the main man was fixed for December, thereby covering Roman Saturnalia, so one of the next most important players, John the Baptist, was deployed to take out the pagan festivities of mid-summer. In the Christian calendar, June 24th became St John’s Day.

This absorbed some older traditions, especially those involving water and fire.

Bonfires may still be lit on this date in parts of the west of Ireland. But St John doesn’t seem to have taken on any of Fortuna’s particular responsibilities, either in the areas of mating or of luck in general.

His most notorious intervention in the former sphere was of course fatal. By objecting to the divorced Herod’s marriage to Herodias, who was also divorced (and from Herod’s half-brother), he incurred the latter’s deadly enmity.

This need not have cost his life, because the Bible tells us that Herod enjoyed John’s preaching and considered him a good man. As we know, however, the king also promised Herodias’s daughter anything she wanted in return for a dance performed on his birthday.

Whereupon Herodias persuaded her to make the infamous request: although blame should perhaps also be shared retrospectively by every political correspondent who has lived since, given that the concept of people demanding heads on plates is so seemingly essential to their writings.

Speaking of plates, and with apologies for the indelicate segue, many Romans still mark this date by eating a stew called Le Lumache di San Giovanni.

It means the “The Snails of St John”, but it probably goes back to pre-Christian times when snail “horns” were a symbol of strife, by eating which Romans helped ensure harmony in their lives.

Thus when Leopold Bloom ate the inner organs of beasts and fowls, he might have been better advised eating the outer organs of gastropods, as his Italophile creator must have known.

In any case, this mid-summer snail eating was Christianised at some point. The story is that one June 23rd – St John’s Eve, also known as “the night of the witches” – a group of Romans saw Herodias convening a coven in Rome’s Lateran fields. They invoked the saint and ate snails to ward off evil, and thanks to this combined defence, the coven passed without misfortune.