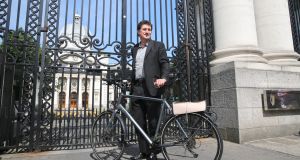 There are numerous reasons for the current reluctance to govern Ireland, and most of them are dubious. Time-warped assertions, piety, naivety and arrogance have combined to produce the current uncertainty and a host of delusions.

On Tuesday, Jennifer Barry, the vice-chair of Fianna Fáil in Dublin South, expressed her sorrow at the prospect of sharing government with Fine Gael and the Green Party on the grounds that “Fianna Fáil brings a really important value and contribution to Irish politics. It’s the party of the working people, the party of the builders and the farmers. Where are their voices being heard?”

Such an assertion invokes the ghost of the party’s founder, Éamon de Valera, and his declaration in 1951 that “although we stand for all sections of the people, nevertheless the sections for which we have a special regard . . . are the small farmers on the one hand, and the workers on the other.”

If the current programme cannot be agreed, is it not incumbent on those elected in February to try alternatives?

But for Fianna Fáil that ship has long sailed, and it is largely Sinn Féin that is now sailing in it. As for the builders, that FF link is hardly something to be hailed, invoking memories of Galway tents, entitlement and the promotion of vested interests over social and affordable housing.

Meanwhile, some Fine Gael members, including Minister for Rural & Community Development Michael Ring, worry about what being in government with the Greens would do to damage rural Ireland, as if climate change is some kind of quixotic urban fetish of no relevance to the welfare of the west of Ireland.

The Green Party seems determined to undermine itself and its priorities. Already it looks badly compromised.

The strategy of senior party members negotiating a programme for government that they then refuse to vote for is not only bad for party unity, it might also ensure that the Greens, in sticking to the mantra “we cannot compromise with the science of climate crisis”, will forgo the chance to make some inroads in tackling that crisis in favour of a supposed political purity that might give them some self-satisfaction but will do little for climate change.

They seem to have learned little. When he wrote his 2012 book Without Power or Glory, about the Greens’ experience in government from 2007-11, former Green Party TD and senator Dan Boyle recalled that when the party was negotiating participation in that government, he was conscious that “throughout our political history we had battled with the perception that we were flaky and not up to the business of government”. That, it seems, is still a problem for them.

Does Sinn Féin really want to be in government or is it actually relishing the prospect of opposition?

Boyle also noted in relation to the members’ convention to vote on the proposed programme for government in 2007 that “Green Party conventions are impossible to manage”.

Boyle argued in 2007 that the programme “wasn’t a great document – it may not even have been a good document, but it had good within it, and that good had come from the Green Party”.

As for Taoiseach Leo Varadkar’s assertion that failure to get the programme for government agreed by the parties’ membership will represent a “political crisis”, the obvious answer to that is the Sinn Féin elephant in the room.

If the current programme cannot be agreed, is it not incumbent on those elected in February to try alternatives? For all the talk of ideological gulfs and incompatibility and battles for political souls and identities, there is actually much consensus in Irish politics.

The current draft programme for government runs to 139 pages and is littered with the phrase “quality of life”; the same phrase appears regularly in Sinn Féin’s general election manifesto from February.

There are also abundant assertions in both documents of a commitment to “equality” and the urgent need for the provision of more social housing and sustained State intervention.

Would a combination of those two documents really represent such an impossible conundrum in relation to government formation, if personal dislike, exaggeration of SF’s economic radicalism (“anyone earning up to €100,000 a year will pay less tax” under SF proposals, according to Mary Lou MacDonald) and fear of opinion polls were set aside? And does Sinn Féin really want to be in government or is it actually relishing the prospect of opposition?

It has frequently been asserted – with much justification – that, historically, smaller parties have paid an unduly heavy price for participation in government in Ireland, but it is equally true that the political landscape is much more fractured now than it was.

The traditional two big beasts of Irish politics secured only 43.1 per cent of the vote between them in February; multi-party coalitions, it seems, will become the norm, so the “swallowing up” argument about previous coalitions is not necessarily a good guide to the future.

If the programme for government does not get over the line, perhaps a revised one could come with realistic costings – though that prospect, it can be safely surmised, is highly unlikely.