Hillary Clinton and the decline and decline of liberal democracy 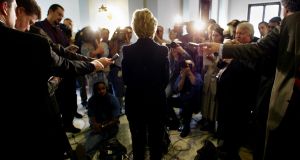 U.S. Senator Hillary Clinton talks to the reporters about her tell-all memoir after excerpts from the book were leaked late yesterday, outside her Capitol Hill office June 4, 2003. In the book she recalls August 15, 1998 when former President Bill Clinton “told me for the first time that the situation (with Monica Lewinsky) was much more serious than was previously acknowledged.” “As a wife, I wanted to wring Bill’s neck,” Clintonrevealed in the book. REUTERS/Kevin Lamarque

In the end, all that was left was the sex. And its hinterland. It was November 1998 and after six years of investigation a pasty faced, but not shame faced, Kenneth Starr testified that Bill Clinton was exonerated of wrongdoing in the Whitewater property scandal and the Vince Foster suicide. There was no evidence of “a pattern of corruption”. All they had to push for impeachment was the Monica Lewinsky affair.

They did. It was sordid. Over the following twenty tumultuous years, Hillary Clinton failed twice to re-patent the Clinton presidential brand. Kenneth Starr expressed regret that his investigation “caused so much pain to so many people” - none more so than Monica Lewinsky, whose life was destroyed. And the American political landscape has reaped a whirlwind.

A new documentary shows where the wind was sowed. Hillary - a four part documentary by Nanette Burstein on Sky - is a Gibbonesque glimpse of the decline and decline of a liberal democracy as well as a poignant political swansong, it purges the soul with terror and with pity.

“I’ve loved, I’ve been loved. The rest is background music,” Clinton murmurs. But to be loved or to be President - that was the question.

When Hillary Clinton first ran for President, she was, as New York senator, a political force and a feminist icon. In her bid for the Democratic nomination, her opponent was history itself: her achievements eclipsed by a charismatic young lawyer from Illinois, Barack Obama. If there is a hierarchy of oppressions, race trumps gender: black women backed him over Hillary. Now white feminists know why.

On her second run, while she was mercilessly bullied by Trump, who mockingly attempted to re-litigate her husband’s sexual misdemeanours, her real nemesis was Bernie Sanders. During the long, hot primary season, he pounded hard at her “Wall St” links and re-awakened in the American memory the idea - fading with its century - that there was something untrustworthy about the Clintons. Trump took it and ran with “Crooked Hillary” until it infected even the sanest of people. Like FBI chief James Comey who, on the eve of the election, re-opened the infamous “emails” investigation. Despite exonerating her, the blow proved fatal.

“That kind of character assault takes a toll.” Clinton knows the corrosive power of calumny. “Even supporters, friends who don’t believe it - they still have a space at the back of their minds and then that space gets bigger - that’s been the story of my public life.”

But this is not merely a story of a public life. It is a portrait of an extraordinary marriage. It is a story unique in the vast lexicon of love stories. It confronts many of the tropes about their relationship, even the paradox that, despite her declaration about not being “Some kind of Tammy Wynette Stand By Your Man,” she actually was.

Their courtship is the stuff of early period chick-lit. He chased her. Though he never expected to marry -“complicated childhood” is the rationale - he immediately recognised his deep need of her. She, excited by her budding lawyer career, was in no rush. Several proposals later, she said ‘Yes,’ and to the astonishment of her circle of feminist friends, moved to Arkansas to become the Governor’s wife .

“She was a full partner in the governorship,” he says. And the footage reveals a dynamic, beautiful couple, high on their shared mission, their passion for politics and their love. But they had reckoned without that toxic conservatism which runs like a subterranean river through US politics.

Her feminism cost him a second term as Governor. She hadn’t taken his name and an unguarded comment deflecting criticism of her job - “I suppose I should have stayed home and made cakes and tea” - was turned into a full blown cyclone: Hillary versus the American housewife.

She changed her name to Hillary Rodham Clinton, he got re-elected as Governor, Then President. Then the real problems began for her.

First Ladyship, it became clear, could never be “full partnership.” They tried and were thwarted at every turn. Her 1995 Beijing speech “women’s rights are human rights and are for all” was a brave bolt for freedom of expression. But storm clouds were gathering. And the storms had names; Paula Jones, Monica Lewinsky.

The truism, that a marriage survives infidelity if fidelity isn’t important is too facile. She navigated the Gennifer Flowers allegation with the confidence of her own sexual power and a great soundbite. But Monica Lewinsky hurt. She sublimated her rage in fighting his impeachment. And, crucially, she stood by him, a position which came to haunt her election campaign: he cheated but they blamed her.

By then all the “character assaults” had taken effect. The emotionally open woman who wanted to make a difference was receding; in her place an intellectual, who met emotional challenge with “policy.” This proved a fatal flaw on the hustings, where populism was providing the narrative for people who felt excluded.

That liberal democracy wasn’t delivering was bewildering. “We weren’t perfect. But is there anything left of everything we tried to do?”

In the end only their bond proved unbreakable. Proving, as ever, the heart has its reasons which reason cannot tell.

1 Coronavirus: Unwinding of latest stage of roadmap ‘could be pushed back further’
2 Mary Hannigan: ‘Bitches Who Stood’ might be better viewed as useful allies
3 UK accuses Russia of election interference and trying to steal Covid-19 vaccine
4 Race against time: The inside story of Ireland’s Covid Tracker app
5 Coronavirus in Ireland: Further reopening delayed amid 'worrying' rise in infection rates
Real news has value SUBSCRIBE