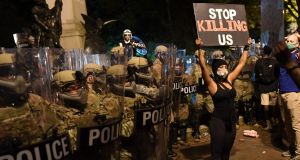 A woman holds a sign in front of a police line outside of the White House on May 30. Photograph: Eric Baradat/AFP via Getty Images

“We all watch in horror and consternation what’s going on in the US,” Canadian prime minister Justin Trudeau said on Tuesday when pressed on Donald Trump’s idea of using soldiers against protesters. And EU foreign and security policy chief Josep Borrell echoed the sentiments. Europe is “shocked and appalled” by the police killing of George Floyd, he said. He condemned an “abuse of power” and “an excessive use of force” and urged the US to act “in full respect of the law and human rights”.

The threat of martial law has capped a bad week for the US’s souring relationship with longstanding allies. The unilateral decision on Friday to withdraw from the World Health Organisation (WHO) has been greeted with dismay in capitals. And, over the weekend, protests from the UK and Canada at Trump’s stated intention to invite blackballed Russia to the June G7 summit, led the US president to postpone the event. Russia was expelled from the group in 2014 following its annexation of Crimea and Trump has repeatedly expressed support for its return.

Germany’s Chancellor Angela Merkel had already made clear she was not going to attend the G7, ostensibly because of the virus. But sources have told journalists that the meeting had not been prepared diplomatically, she had no wish to act as a prop for Trump’s election campaign, and strongly disapproved of the Russian invitation and the WHO disaffiliation.

Merkel, who has been the western ally least cowed by Trump bluster and has multilateralism deep in her DNA, decided that “if you’re going unilateral, I’m not going to be there to support you”, Thomas Wright, of the Washington Brookings Institution speculates. “The allies all think he’s all over the place and they’ll try to avoid him.”

Trump was clear about his priorities – two phone calls on Sunday and Monday to authoritarian presidents and fellow pandemic denialists, Russia’s Vladimir Putin and Brazil’s Jair Bolsonaro, to discuss enlisting them into G7.

And the authoritarian world, from Iran, to Russia, North Korea, Turkey, and China, was expressing quiet glee amid jibes about hypocrisy: “After just three days of rioting in Minneapolis President Trump threatened to shoot protesters,” a commentary in China’s nationalist Global Times observed. Zhao Lijian, a foreign ministry spokesman, asked: “Why did the US have so many problems with restrained law enforcement by the Hong Kong police but have no problem at all with threatening to shoot at its domestic protesters?”

Kremlin spokesman Dmitry Peskov said the US was now having to deal with police misconduct and claimed the US compared unfavorably with Russia. According to the news agency TASS, he added: “Thank God things that happen in America do not happen in [Russia]”.

1 Goodbody’s planned €155m sale to Bank of China falls through
2 This charming man: how Paschal Donohoe won the Eurogroup presidency
3 Monster or machine? Everything we know about coronavirus after six months
4 Covid-19: NPHET member denies trying to ‘scare people’
5 ‘My rent here is so low it’s a joke’
Real news has value SUBSCRIBE