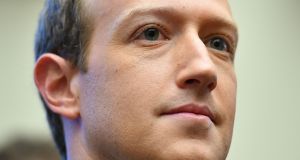 “I believe strongly that Facebook shouldn’t be the arbiter of truth of everything that people say online,” Mark Zuckerberg said, even though Facebook is exactly that when it suits. Photograph: Mandel Ngan/AFP via Getty Images

Twitter’s decision to take direct action against two of US president Donald Trump’s tweets last week was a significant, potentially far-reaching, move, not just for the company but for recalibrating public expectations in the future on how these powerful global platforms respond to concerning posts from public figures.

One Trump tweet last week falsely claimed mail-in ballots would be used to encourage voting fraud (even though Trump has personally availed of mail-in ballots). The baseless tweet was given a fact-check warning notice by Twitter, encouraging people to “get the facts about mail-in ballots”, and linking to fact-checked information.

When Fox News subsequently asked Facebook chief executive Mark Zuckerberg how his own platform would handle such a situation, he stuck to Facebook’s consistent, disingenuous “free speech” defence. “I believe strongly that Facebook shouldn’t be the arbiter of truth of everything that people say online,” he said, even though Facebook is exactly that when it suits. Facebook has a large fact-checking section that has a sometimes-enforced policy of removing false claims about topics such as Covid-19.

Nonetheless, the action by Twitter pushed Trump to threaten social media platforms with a probably meaningless executive order removing protections that enable the platforms to avoid liability for the content their users post.

Twitter took firmer action when Trump tweeted last Thursday that furious protests in Minnesota over the appalling police killing of George Floyd would be met with violence, stating: “When the looting starts, the shooting starts”. Twitter hid the tweet – though Twitter users can still click in to view it – and blocked the ability to reply to or share it. A Trump Twitter tantrum followed.

Ironically, this theatrical thrust and parry between Trump and Twitter (or Facebook) is less titanic “free speech” battle and more a depressing reminder of how such dysfunctional relationships have amplified the power of both the platforms and their most abrasive and divisive users.

These virtual bully pulpits are easily exploited by public figures wishing to make statements and assertions while deftly avoiding formal questioning or being publicly held to account – at least, not before the assertion spews forth and is shared relentlessly.

The very algorithms that structure the platforms are primed to privilege and spread exactly the sort of outrageous utterance beloved of figures like Trump. The more shares, the more likely it is to appear in your own timeline.

Still, Twitter’s moves are a welcome if belated initial step towards taking some modest responsibility for curtailing obvious untruths and potentially dangerous bombast from those intent on their deliberate spread.