Dominic Cummings, chief adviser to British prime minister Boris Johnson, has told the media that he feels he acted "reasonably and legally" after driving from London to Durham despite the UK's Covid-19 restrictions. 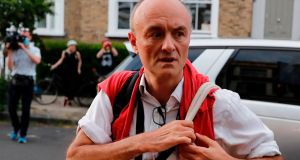 If we had not already seen the earlier resignations of the Scottish chief medical officer and a top British epidemiologist for breaking lockdown rules, perhaps Boris Johnson’s Jesuitical defence of his aide, Dominic Cummings, might have washed. Perhaps a contrite apology might have sufficed. But the British prime minister’s insistence that Cummings was only behaving “instinctively”, as any father would do, and doing his own bit to reduce possible virus transmission, was too much of a reinterpretation of the guidelines even for many Tory backbenchers.

Cummings’s attempt to make the case at a press conference in Downing Street that he was allowed by the lockdown rules to break them in “exceptional circumstances” when care of a child was involved, was far from persuasive. How many others, equally pressed with childcare responsibilities, will feel that they too, aided by instinct alone, can unilaterally interpret the rules so flexibly? Without asking anyone’s permission.

That he asked himself repeatedly the question “What’s the safest thing?” to do to minimise the spread of the disease is commendable. But he was asking the wrong person.

Johnson has backed Cummings’s reasoning, insisting that the “stay at home” rule everyone else believes to be inflexible is in fact open to interpretation. And yet this is not a court of law but of public opinion. The perception of a breach of the rules, certainly of their spirit, is as important as any legal nicety. The inescapable sense is of one law for the two-homed rich and Boris-connected, and another for the rest.

Johnson’s determination to stand by Cummings is not just a political mistake for which he is likely to pay electorally, but, more importantly, a blow to his authority in selling lockdown. That authority, crafted carefully out of a notional deference to scientists and experts by untrusted politicians, is the cornerstone of public acceptance of tough measures and of the “we’re all in this together” mantra.

We know from the Brexit debate that the Johnson team does not like the idea of the UK being “rule takers” from partners in Europe. The mask has slipped – Cummings and Johnson have clearly embraced the same exceptionalism on a personal level. But no more than the UK can shake off the responsibilities implicit in sharing a geographical or economic space, can individuals shake themselves free of the rule-of-law glue that binds society.

The ruthlessly ambitious Johnson’s loyalty to, and reliance on, a man who did more than any to ensure his elevation, now one of the most powerful unelected figures ever to work at Number 10, is, however, a sign ultimately of weakness. Cummings has survived for now. But, as one columnist warns, “Dominic Cummings will have the full support of Boris Johnson. Until he suddenly doesn’t.”