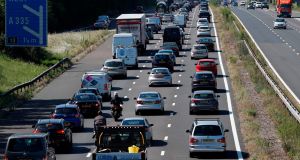 Traffic heads westward along the M3 near Eastleigh, Hampshire on Saturday as lockdown measures were eased in England. Photograph: Adrian Dennis/AFP via Getty Images

June has brought easings of the lockdown in several European countries. In the coming days new measures will take effect in Italy, France, the Netherlands, Greece, Spain and Estonia. And then there’s the UK. Primary schools in England have reopened for some pupils, yet other devolved parts of the union are weeks or months away from that point. In England, up to six people can now congregate outdoors in public and private areas while practising social distancing. In Scotland, up to eight people can meet other households, and in Northern Ireland open-air gatherings are allowed and small outdoor weddings may soon follow.

London may be going too fast. Some 4,000 new coronavirus cases are being reported every day and the UK (mainly England) has the highest reported levels of cases and deaths – 39,000 – in Europe. “Five tests” said by the government in May to be a condition for restrictions to be relaxed have yet to be met. And while figures for London show impressive declines, the north is still some way behind. The danger of second waves or pockets of infection looms large and regions may need to reimpose shutdowns to control them.

Boris Johnson’s government does not inspire confidence, whether it is the abandoned and belatedly restarted testing-and-tracing programme, the PPE shortages, the neglect of care homes, or the Dominic Cummings controversy. And there is a sense that the mantra about following the science no longer applies. Lockdown decisions were always political – risk assessment is a scientific question while decisions on the acceptability of degrees of risk, the weighing of medical, social, economic risks against each other, are a political function. But the mask has slipped gradually.

That decisions are ultimately taken by politicians is inevitable, but their ability to sell the message, to manage expectations and to get citizens to obey their injunctions are crucial. The UK government’s credibility has waned and it should not imagine it will be revived by prematurely bowing to public enthusiasm for a return to work.