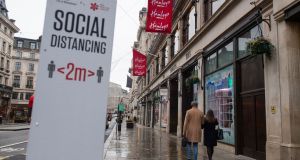 A new level of uncertainty, fed by news of the new ultra-infective coronavirus variant identified in the UK and by continuing nervousness over deadlocked Brexit talks, is serving up a pre-Christmas perfect storm. With millions in the UK seeing the kibosh put on their family celebrations in a new ratcheting up of lockdown, massive lorry gridlock on the south coast as still-extending continental travel bans seize up traffic, jittery markets have also responded with sterling, stock and oil prices all tumbling.

Canada yesterday joined European states and others in their ban on UK travellers while the US hinted it might do so too.

To date there is no evidence that the new variant, now called B.1.1.7, one of two dozen mutations already identified, will affect the course of the illness in infected people or, crucially, the effectiveness of Covid-19 vaccines under development. So southern England and London infections may be soaring – it has also been identified in the Netherlands, Denmark, South Africa and Australia – but there do not seem to be any related increases in severe symptoms. It has not been identified in Ireland but few imagine we will escape.

The increased infection rate, however, threatens to overwhelm the health services and the inevitable, necessary, response of draconian lockdown might have been more palatable to a demoralised public had Boris Johnson not so blithely insisted over the past week that there was no need to respond to the unexplained infection surge.

That u-turn and the government’s disastrous messaging strategy have seen a swelling backbench revolt and the PM newly pilloried in the media as even his most faithful allies in the Tory press turned on him yesterday.

The Daily Telegraph leader complained of “This dismal pattern of promising one thing and delivering another …” while the Daily Mail asked “Does the prime minister have any idea what he’s doing? Johnson’s previous ‘Have yourself a merry little Christmas’, has morphed into another popular song with a very different tone – ‘Lonely this Christmas’,” the tabloid complained.