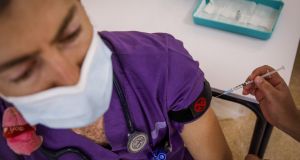 A nurse administers a dose of the Pfizer-BioNTech Covid-19 vaccine to a medical worker at the Wolfson medical centre in Holon, Israel. Photograph: Kobi Wolf/Bloomberg

Over-60s in Israel lined up at clinics throughout the country on Monday to receive the Covid-19 vaccination as a nationwide campaign got under way aimed at turning Israel into the first country in the world whose population is immune to coronavirus.

The over-60s make up more than 90 per cent of Israel’s more than 3,100 Covid-19 fatalities, and together with other high-risk citizens were designated as the first group to be able to register for the jab.

Some 60 vaccination centres opened across Israel, and health ministry officials have promised there will be no shortage of vaccines. The government hopes to inoculate some 60,000 people per day and as many as two million Israelis by the end of January.

Demand is high and websites for registering have frequently crashed.

Israeli officials said the aim was to allow for families and friends to gather together safely for the festive meal at the Passover holiday, which falls at the end of March.

Some 10,000 medical professionals were vaccinated on Sunday, the first day that vaccinations were provided in Israel. More than 82 per cent of doctors say they will take the vaccine against Covid-19.

The vaccines will be made available to the general public in the coming weeks with the arrival of four million more Pfizer vaccines.

The vaccine comes in two doses, administered three weeks apart. A week after the second injection people will be issued a “green passport” to prove they have been vaccinated.

The passport carrier will not have to go into isolation if exposed to a verified coronavirus carrier or upon their return from abroad.

Prime minister Binyamin Netanyahu formally and festively launched the vaccination campaign on Saturday night at Tel Aviv’s Sheba hospital. At the event, which was broadcast live on television, radio and online platforms, Mr Netanyahu described the development of the vaccine as “a small step for man, a giant leap for the health of every one of us”, while urging the general public to follow his “personal example” and to be vaccinated.

Coronavirus co-ordinator Prof Nachman Ash warned that Israel would not see significant results from the vaccination drive for weeks.

The rollout of the vaccination programme came too late to prevent a worrying surge in infections over the past few days. In response, the coronavirus cabinet on Monday banned all foreigners from entering the country from Wednesday and decided that all Israelis returning to the country would have to quarantine in designated state-run hotels.

Mr Ash also warned that without the suspension of all commerce, Israel would see up to 1,900 seriously ill patients within three months and the death toll rise by up to 1,250 in the same period.