Ireland in line for up to 9,750 Covid vaccine doses just after Christmas

Europe’s medicines regulator has recommended conditional approval for the Covid vaccine developed by Pfizer and BioNTech. 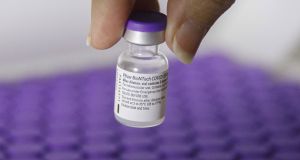 A vial of the the Pfizer-BioNTech Covid-19 vaccine. Photograph: Kobi Wolf/ Bloomberg 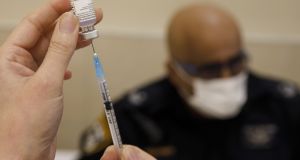 European Medicines Agency has recommended approval for the rollout of the Covid vaccine developed by Pfizer and BioNTech. Photograph: Kobi Wolf/Bloomberg

Ireland will receive up to 9,750 doses of the Covid-19 vaccine by the end of the week after the European Union gave the green light to the vaccine developed by Pfizer and BioNTech.

It is, as yet, unclear what size the two Irish shipments will be. However, industry sources expect they will be towards the upper end. The shipments are expected on St Stephen’s Day though that might change.

The European Union approved the Pfizer-BioNTech vaccine for rollout in the bloc on Monday, paving the way for the first doses to be shipped within days.

“This is a very good way to end this difficult year, and to finally start turning the page on COVID-19,” European President Ursula von der Leyen said as she announced the Commission’s sign-off on shipments to begin.

It came as the European Medicines Agency issued a provisional marketing authorisation, in what director Emer Cooke described it as a “significant step forward” in the fight against the pandemic and a “historic scientific moment” based on “unparalleled mobilisation and sharing of information”.

The EU has said that member states will be able to begin administering vaccinations from December 27th, depending on the readiness of national authorities.

Great news from @ema_news - it has recommended authorisation of the first Covid vaccine in the EU. Now we wait to see if the European Commission approves it tomorrow. https://t.co/eZ6fIDl1Jz

Nevertheless, the EMA warned that it is essential to continue pandemic control measures such as reducing contacts and wearing masks, as it will take time for the vaccine to be rolled out.

“The vaccine alone will not be the silver bullet that will allow us to return to normal life, but the authorisation of this first vaccine is definitely a major step in the right direction and an indication that 2021 than be brighter than 2020,” Cooke said.

The World Health Organisation said urgent tests are ongoing to check whether the Covid-19 vaccines that have been developed are effective against the new strain.

“The more we allow it to spread, the more opportunity it has to change... Now is the time to double down on the public health basics that have seen many countries suppress the virus effectively,” WHO Direct General Tedros Adhanom Ghebreyesus told a news conference.

Minister for Health Stephen Donnelly welcomed the regulator’s approval for the vaccine, saying it was “great news”.

Commenting on whether the vaccine would prevent infection from the new variant of Covid-19 spreading quickly in the United Kingdom, Ms Cooke said this needed to be monitored.

“There is still new information coming in and this needs to be fully assessed, such as the recent reports on the new variant. These are issues that need to be fully scientifically assessed. At the moment, we can say that there is no evidence to suggest this vaccine will not work against the new variant,” the EMA boss said.

The authorisation is based on trials involving 44,000 people. The vaccine has not been recommended for people aged under 16, because there have not been trials for children yet. Additional study is also required for immunocompromised people and pregnant women, according to the EMA, as well as on whether vaccinated people could still transmit the virus to others.

“We’ve been guided by the strength of the scientific evidence and nothing else,” Ms Cooke said. “The evidence convincingly shows that the benefits are greater than the risks of the vaccine.”

The vaccine is administered in two doses at least 21 days apart. The most common side effects are brief pain and swelling at the injection site, tiredness, headache, muscle and joint pain, chills and fever, and the benefits far outweigh the risks, according to the EMA.

Separately, the regulator in Switzerland, which is not an EU member, approved the vaccine at the weekend. – Additional reporting Reuters