The Irish Times view on the Arab Spring 10 years on: lessons from a righteous revolt 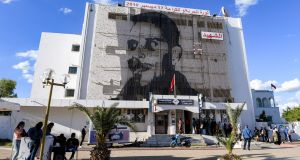 People queue up outside the main post office on Mohamed Bouazizi Square, its facade showing a picture of Bouazizi, in the centre of the town of Sidi Bouzid in central Tunisia in October. The spark that set off the Arab Spring was the tragic suicide of Tunisian street vendor Mohammed Bouazizi, who, having long been cheated and humiliated by state officials, set himself on fire. Photograph: Fethi Belaid / AFP via Getty Images

‘Al-Sha’b Yurid Isqat al-Nizam.” “The people demand the overthrow of the regime.” This battle cry of rebellion in Tunisia, Egypt, Yemen, Libya and Syria looks bereft and defeated 10 years on from the dramatic events in 2011 commonly known as the Arab Spring. Instead of giving birth to democratic transformation, a bleak picture of autocratic counter-revolution, brutal repression, economic stagnation and growing inequality prevails in the Middle East. Notwithstanding popular movements for change in Sudan, Algeria, Iraq and Lebanon there is little optimism about their success.

When the young Tunisian Mohammed Bouazizi set himself on fire in protest against corruption and harassment in December 2010 he sparked a revolt against President Zine El Abidine Ben Ali, who fled to Saudi Arabia. Calls for greater economic opportunity and democratic reform drove that movement. Its street protests caught the public imagination in Egypt, then in Libya, with Bahrain, Yemen and Syria following them.

Egypt’s huge population and influence in the region gave events there a central significance. President Hosni Mubarak resigned and handed over to the military in February 2011. Elections were organised and the Muslim Brotherhood-linked government of Mohammed Morsi was elected in 2012, but was overthrown the following year by the military led by the general, now president, Abdel Fattah el-Sisi. Morsi’s fate set the seal on a central question running through these revolts – the role of Islamic movements and whether they should be trusted as agents of regime or democratic change. That they cannot be so trusted is the lesson drawn by the Egyptian military in a brutal reassertion of autocratic power over the last nine years. It was supported by Saudi and other Gulf monarchies afraid of the Muslim Brotherhood and linked groups in other states.

That these links include extreme Islamic movements which must be fought and put down became a leitmotif for these reactionary Arab regimes and then for the Syrian government confronted with a huge revolt which became a civil war for state power. That chimed in with fears of the United States and European powers over regional stability and terrorism. International intervention in Libya and Syria then transformed the Arab revolts into geopolitical conflicts over power, territory and migration.

On a long view the economic and democratic demands by many millions of young people for a better life in the Middle East continue and have not been defeated. They are blocked by entrenched regimes and wealthy elites relying on conservative allies to resist change. Those who support these popular demands must learn the lessons from Tunisia, that successful political change without economic prosperity is a poor and incomplete recipe for real change.