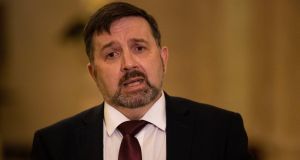 An emergency meeting of the North’s Executive was underway late on Monday night to discuss travel from Great Britain amid concerns over the new, more virulent strain of coronavirus which has emerged in England.

Ministers had been due to meet on Tuesday, but the meeting was brought forward unexpectedly following calls for a meeting on Monday night.

They are expected to discuss the legal advice obtained by Minister for Health, Robin Swann, from the Attorney General around the legalities of imposing travel restrictions between the North and Great Britain.

It is understood Mr Swann is not proposing an immediate travel ban, but has recommended issuing guidance advising against non-essential travel between the North and the Republic, as well as between Northern Ireland and Great Britain.

He has also advised that anyone arriving in the North self-isolate for ten days, and has called for further work to examine the legalities around any potential travel ban.

The North’s Deputy First Minister, Michelle O’Neill of Sinn Fein, said on social media on Monday night that the situation was “very grave” and the Executive “must meet tonight.

“There is no time to loose [SIC]in agreeing a travel ban from Britain. Belfast and Dublin must act together to keep everyone on this island safe.”

Yesterday Ministers in the North were split over whether travel to Northern Ireland from Great Britain should be banned to limit the spread of the new, more infectious strain of Covid-19.

Ministers are also considering the strengthening of passenger locator forms for those arriving into Northern Ireland.

Concerns over travel from Britain were aired at an emergency meeting of the Executive on Sunday. Ministers discussed a short-term amendment to the 1967 Public Health Act, which would permit a temporary ban on internal travel within the UK.

Sinn Féin is in favour of introducing a ban on travel from Britain, but their partners in government, the DUP, argue that the existing rules blocking travel from the worst-affected, tier 4 areas in England are sufficient.

Following “detailed conversation” at the Executive meeting on Sunday night, Mr Swann said, he had been asked to speak with the Attorney General “as to the specifics of the legality of the utilisation of the 1967 Act”.

The Minister was repeatedly challenged by Sinn Féin in the Assembly on Monday, with the MLA Pat Sheehan accusing the Executive of “dithering and delaying” over the introduction of a travel ban.

He said he had received information from someone in the airline industry detailing a flight which had left Belfast on Sunday with 30 passengers and was “due to bring 80 back from Heathrow, and came back with 160.

“People who couldn’t get flying to Dublin had rebooked their flights, and every flight this week into the North here is going to be bunged in the same way,” Mr Sheehan said.

His party colleague, the MLA John O’Dowd, said: “Sometimes there are times to act and seek forgiveness later. Surely it is time to act.”

The SDLP MLA Cara Hunter said she shared “concerns on flights coming to the North, and we’ve seen decisions made in London, Cardiff and Edinburgh around the new Covid variant but we’re standing here today with no action.”

Mr Swann defended the Executive’s decision to seek legal advice and said nobody should be travelling from England to Northern Ireland.

Of the levels 1-3, which are in force in the rest of England, he said the advice was to stay local. “Getting on a plane to come to Northern Ireland is not local travel, so people should not be doing it,” the Minister said.

In relation to the concerns raised over “residents from the Republic of Ireland who are now using Belfast or Londonderry airports as a point of entry to the island,” Mr Swann said, it was “unfortunate the Irish Government took the intervention they did without any interaction or heads up to ourselves that that’s what they were going to do”.

After the announcement on Sunday that travel from Britain to the Republic was to be banned for at least 48 hours, the Minister said he had “noticed afterwards there was statements that they would engage . . . if we want to act together and co-ordinate a response it’s better that we actually talk to each other before making decisions like that because it allows us to express not just our concerns but also how we can possibly look towards common approaches.”

The North’s Department of Health (DoH) announced on Monday that seven more people with coronavirus had died in the last 24 hours, bringing the total number of fatalities to 1,203.

A further 555 people tested positive for the virus.

There are now 446 people receiving treatment for coronavirus in the North’s hospitals, with 30 in intensive care.

Meanwhile the North’s Minister for Education, Peter Weir, announced on Monday that non-exam classes in post-primary schools would move to remote learning for at least two weeks from January 25th.

However, the Mr Swann said he did not believe a return to school as normal at the start of January was a “sustainable position” and additional measures should be put in place.