The Irish Times view on Turkey’s elections: Erdogan tightens his grip on power 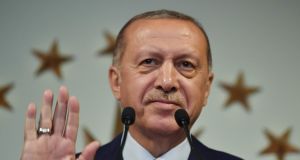 Official results in the Turkish presidential election showed President Recep Tayyip Erdogan on 53 per cent, enough to spare him a runoff against his main challenger, Muharrem Ince, who won 31 per cent. Photograph: Bulent Kilic/AFP/Getty Images

With his decisive victory in national elections at the weekend, Turkish president Recep Tayyip Erdogan has tightened his grip on power and accelerated his country’s slide into authoritarian rule. Results in the presidential election showed Erdogan on 53 per cent, enough to spare him a runoff against his main challenger, Muharrem Ince, who won 31 per cent. In the parliamentary race, Erdogan’s Islamist AK party came first with 42 per cent, which will allow it to retain its majority thanks to a strong showing by its allies in the nationalist Movement Party, which won 11 per cent of the vote.

The election was the first since Turkish voters narrowly approved a referendum last year to give the president sweeping powers. Under the new system, the office of prime minister will be abolished, parliament’s powers are curtailed and Erdogan will be allowed rule by decree. These are powers he has been exercising under the state of emergency introduced after the failed coup attempt in 2016, but by putting them on a permanent footing, Erdogan has made himself immeasurably more powerful. Little wonder some call him a “new Sultan” in the mould of the absolute rulers of the Ottoman empire.

“Turkey has given a lesson in democracy,” Erdogan said in his victory speech. It was a curious lesson – one that included denying the opposition fair coverage on state media, locking up opposition figures, sacking critical civil servants and accusing rivals of supporting terrorism. All of this meant the odds were stacked in Erdogan’s favour. Indeed, given those circumstances, the campaign at least offers some glimmers of hope amidst the darkness for Turkey’s democrats. In Ince, the anti-Erdogan side was led by a charismatic figure who rattled the president and energised the opposition. As a result, Erdoganended up having one of his most challenging campaigns since coming to power 16 years ago.

A silver lining of sorts came in the showing of the liberal, democratic and pro-Kurdish Peoples’ Democratic Party (HDP), whose leader Selahattin Demirtas ran his campaign from a prison cell, where he is awaiting trial on charges of supporting the outlawed Kurdistan Workers’ Party (PKK). The HDP exceeded the 10 per cent threshold required for representation in parliament. Overall, the new parliament will be the most politically diverse in 35 years, with most factions represented. Turnout, at 87 per cent, was very high.

Notwithstanding all of that, Turkey’s democrats face the fight of their lives. Erdogan has long had an autocrat’s instincts. Now he has an autocrat’s powers. The fear is that his efforts to close the space for free public debate is only beginning. His opponents’ challenge is to work out how to make their voices heard in an increasingly authoritarian state.